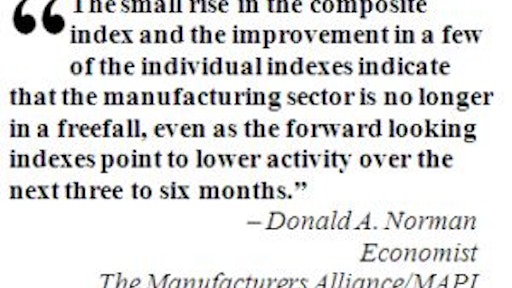 Arlington, VA — July 22, 2009 — The road to recovery in the manufacturing sector will likely be slow, arduous and painstaking, but there is some evidence that the worst has passed, according to a quarterly survey by the Manufacturers Alliance/MAPI.

In MAPI's "Survey on the Business Outlook—June 2009," the composite index rose to 24 from an historic low of 21 reported in the March 2009 report. At 24 percent, the index indicates that overall manufacturing activity is expected to contract over the next three to six months. While the index is at its second lowest level since the survey originated in March 1972, it marks the first time it has shown improvement since June 2007.

The index is a leading indicator for the industrial sector. The survey was conducted on a semi-annual basis from 1972 to 1991 before being conducted on a quarterly basis in 1991. It should be noted, however, that the index measures the direction of change rather than the absolute strength of activity in manufacturing.

The June 2009 index of 24 marks the fourth consecutive quarterly reading below 50, the demarcation point between growth and contraction, and pales in comparison to one year ago when the June 2008 index registered at the 50 mid-point.

"The small rise in the composite index and the improvement in a few of the individual indexes indicate that the manufacturing sector is no longer in a freefall, even as the forward looking indexes point to lower activity over the next three to six months," said Donald A. Norman, MAPI economist and survey coordinator."

While a variety of individual indexes are included in the survey, the business outlook index is a weighted sum of the shipments, backlogs, inventories and profit margin indexes. Seven of the 12 individual indexes measured in the survey fell to all-time lows, but only slightly and none by more than five points. The declines were offset somewhat by improvement in other areas. In the March 2009 survey, 11 of the 12 indexes reached all-time lows.

The brightest news may have come in the inventory index, based on a comparison of inventory levels in the second quarter of 2009 with those of one year ago. It dropped to 15 percent in June from 37 percent in March, indicating that manufacturers are making substantial progress in paring an inventory overhang.

The non-U.S. prospective shipments index, which measures expectations for shipments abroad by foreign affiliates of U.S. firms in the third quarter of 2009 compared to the same quarter of 2008, rose to 15 percent from 8 percent. The export orders index, which measures how second quarter 2009 exports compare with those of second quarter 2008, increased to 11 percent in June from 8 percent in the March survey.

The quarterly orders index, which compared new orders for the second quarter of 2009 with the same quarter one year ago, edged up to 6 percent from 4 percent in the previous survey. The U.S. investment index, which queried executives on their expectations regarding capital investment in 2009 compared to 2008, held steady at 14 percent in June from the March report.

Other indexes fell to new record lows. The backlogs index, which compared the second quarter 2009 backlog of orders with the backlog of orders one year earlier, fell to 9 percent from 15 percent in the March survey. An accumulation of backlogs usually occurs when new orders exceed shipments.

The research and development (R&D) index asked respondents for their forecasts regarding R&D spending in 2009 compared to 2008. The R&D index fell to 38 percent in June compared to 41 percent in March, only the second time since December 2001 this index failed to reach the breakeven point.

The capacity utilization index, based on the percentage of firms operating above 85 percent of capacity, fell to 8.1 percent in the current survey from 10.5 percent three months ago.

The non-U.S. investment index, which asks about companies' plans in 2009 for capital spending outside the United States, dropped to 13 percent from 14 percent. The profit margin index fell to 18 percent in June compared to 19 percent in the March report, marking the seventh straight quarter of decline.

The second part of the survey focused on trends in inventories and the costs and challenges of an inventory overhang. It found that the problem of inventories erupted during the last four months of 2008. It presently takes an average of 62.9 days for companies to sell their inventories compared to 56.6 days in 2008, and inventory costs average 21.9 percent of sales. The major barrier to reducing inventories is the difficulty of forecasting sales, and inventory overhang is less of a problem in India and Latin America than in the United States and Western Europe.

The survey reflects the views on current and future business conditions of 63 senior financial executives representing a broad range of manufacturing industries.