Decline in manufacturing output may have reached bottom; MAPI economics views outlook for global recovery as weak and laced with uncertainty 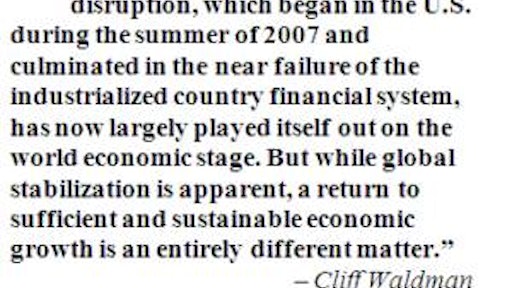 Arlington, VA — July 15, 2009 — The worldwide plunge in manufacturing output seems to have reached a temporary bottom, even in countries such as Japan where the industrial downturn was especially severe. Nonetheless, the immediate outlook for a resumption of world economic growth remains tentative and in flux, according to a new report from the Manufacturers Alliance/MAPI.

In MAPI's "Quarterly Forecast of U.S. Exports, Global Growth and the Dollar: Third Quarter 2009 Through Fourth Quarter 2010," economist Cliff Waldman concludes that weak growth, at best, is in store for the advanced economies during 2010.

The short-term prospects are mixed for key emerging market economies, depending upon the degree of openness, export diversification and ties to the United States. The report says that U.S. export demand will contract at an historic pace before experiencing very sluggish growth in 2010, and the U.S. dollar will resume its downward slide in 2010.

"Incoming economic and financial data indicate that the epic credit disruption, which began in the U.S. during the summer of 2007 and culminated in the near failure of the industrialized country financial system, has now largely played itself out on the world economic stage," Waldman said. "But while global stabilization is apparent, a return to sufficient and sustainable economic growth is an entirely different matter."

The steep climb in the U.S. dollar and the virtual crash in global demand underlies MAPI's forecast that exports of U.S. goods and services will contract by 13.6 percent in 2009, essentially matching the 1958 decline as the deepest export contraction of the post-World War II era. A modest rebound of 1.7 percent, however, is anticipated during 2010 as the world economy begins to regain its footing.

The global growth outlook, however, has its risks, MAPI said. "The principal risk to the resumption of global growth is the onset of a damaging global deflation, a protracted period during which the average price level actually falls," Waldman warned.

MAPI forecasts the U.S. dollar, on a compound annual basis, to be flat against the currencies of the industrialized nations during the fourth quarter of 2009. Depreciation should return in earnest during 2010 as world financial conditions continue to normalize and as markets refocus on global current account balances. A 5 percent annualized decline in the dollar against the advanced economy currencies is anticipated during the first half of 2010, followed by a 3 percent decline in the third and fourth quarters in 2010.