Vendors must reaffirm the fundamentals of the SaaS Model and reassure users of its benefits, Gartner reports 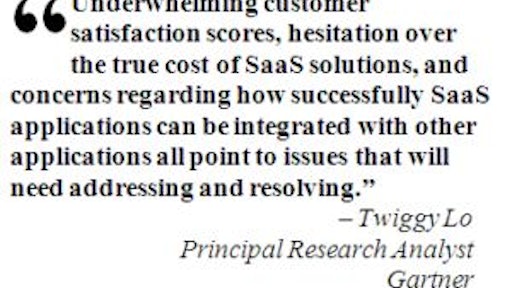 Stamford, CT — July 23, 2009 — Although software as a service (SaaS) is more mainstream and less controversial than ever before, many customers are underwhelmed by their current experience of it and sense that SaaS is not quite the panacea it often promised to be, according to a recent survey by technology research firm Gartner.

The survey, which was conducted in December 2008 among users and prospects of SaaS solutions in 333 enterprises in the U.S. and the U.K., found that the apparent acceptance of SaaS as a viable model has not entirely translated into satisfied users of SaaS.

"Our research findings did not exactly provide a ringing endorsement of SaaS. In fact I would go as far as to say that satisfaction levels among SaaS users are little more than lukewarm," said Ben Pring, research vice president at Gartner. "Although macroeconomic factors would seem to favor SaaS providers, almost two thirds of respondents said that they planned only to maintain their current levels of SaaS in the next two years."

In addition to the 58 percent of organizations that said they will maintain current levels of SaaS in the next two years, Gartner found that 32 percent will expand, 5 percent will discontinue and 5 percent will decrease levels.

Survey findings showed that overall, organizations are somewhat satisfied with SaaS, with an average score 4.74 on a 7-point scale. All 16 aspects included in the survey rated similarly, including (in order of popularity) functionality for business users, provider responsiveness, reliability of performance to technical specifications, service reliability and support compliance and risk management.

Gartner found slight differences between U.S. and U.K. survey participants. U.S. organizations rated all 16 aspects slightly higher than the overall average at 4.94, while U.K. organizations were more critical and rated slightly lower at 4.34.

When asked to identify the top three factors that they would consider in making their decision to deploy SaaS, meeting technical requirements was the top overall consideration at 46 percent, followed by security, privacy and/or confidentiality at 33 percent and ease of integration and functionality needed for business unit owners, both at 29 percent.

Respondents who have considered using SaaS, but decided not to, were asked what factors they considered in making the decision. Forty two percent cited high cost of service, 38 percent said difficulty with integration and 33 percent said the solution didn't meet technical requirements. These findings contradict the general impression that SaaS could help alleviate costs and also that it does not require much integration and technical requirements.

"At a time when SaaS is becoming more of a consideration for more enterprises, the results of this survey will be somewhat disquieting for SaaS vendors," said Twiggy Lo, principal research analyst at Gartner. "Underwhelming customer satisfaction scores, hesitation over the true cost of SaaS solutions, and concerns regarding how successfully SaaS applications can be integrated with other applications all point to issues that will need addressing and resolving."

Lo said that SaaS vendors must focus on truly delivering lower TCO, facilitating easier deployments that negate the need for expensive consulting support and providing more robust integration strategies that recognize the heterogeneous environments that most customers now run and will run in the near future. Most importantly, she said that vendors must reaffirm the fundamentals of the SaaS model — that SaaS solutions are lighter, simpler, more intuitive, more agile and more modest.

Gartner's report, "Dataquest Insight: SaaS Adoption Trends in the U.S and the U.K.," is available for purchase on the firm's Web site, www.gartner.com.

Got an opinion you'd like to share about software-as-a-service applications for the supply chain? Drop us a line at areese@sdcexec.com. We'll publish thoughtful comments on SDCExec.com as a postscript to this article.