Recession Seen Ending, But Recovery Expected to Be Modest and Fragile

Quarterly forecast from The Manufacturers Alliance/MAPI suggests that economy has bottomed out, with uptick expected in second half of '09 and rebound continuing in '10 and '11 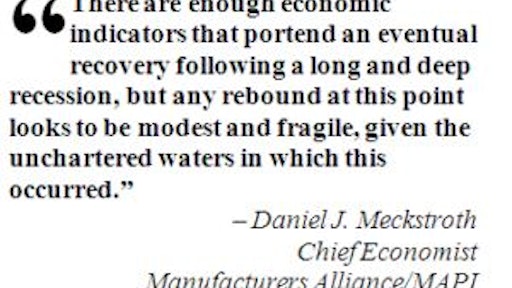 Arlington, VA — August 27, 2009 —. As signs continue to emerge that the U.S. economy is improving, a recovery from the worst recession since World War II is likely to be "modest and fragile", according to a new report from The Manufacturers Alliance/MAPI.

It its "Quarterly Economic Forecast" report, MAPI predicts that inflation-adjusted gross domestic product (GDP) will decline 2.7 percent in 2009 before rebounding to 2.1 percent growth in 2010, and by 3.2 percent in 2011. The GDP forecast for 2009 in the current MAPI report is marginally better than the previously anticipated 2.9 percent decline for this year projected in the May 2009 release.

The alliance generates its macroeconomic and industry forecasts by supplying major assumptions for the economy and running simulations through the IHS Global Insight Macroeconomic Model.

"We believe the economy has bottomed out and will post a 1.9 percent increase at an annual rate in the third quarter of 2009 and 2.5 percent in the fourth quarter," said Daniel J. Meckstroth, Manufacturers Alliance/MAPI chief economist. "The forecast for 2010 calls for a slight rebound in overall consumer spending based on slow personal income growth, and we look for continued improvement in the consumer sector in 2011.

Meckstroth added that a swing from cutting inventory in 2009 to adding inventory in 2010 and 2011 will have the impact of boosting production. "Economic momentum will be enhanced as pent up demand is unleashed, especially for new housing and motor vehicles as both of these industries are rebounding form several years of exceptionally low production," he said.

The forecast expects industrial equipment expenditures to decline by a severe 22.7 percent this year and to further decline by 0.7 percent in 2010. But MAPI economists envision a significant turnaround of 20.5 percent growth in 2011. The outlook for spending on transportation equipment is for extremely wide swings in either direction. The analysis projects a 42.8 percent decline in 2009, followed by a 52.1 percent increase in 2010, and a 36.4 percent advance in 2011.

Spending on non-residential structures is expected to retrench over the next two years, declining by 17.6 percent in 2009, and by an additional 15.7 percent in 2010 before seeing growth of 1.8 percent in 2011.

"There are enough economic indicators that portend an eventual recovery following a long and deep recession," Meckstroth said, "but any rebound at this point looks to be modest and fragile, given the unchartered waters in which this occurred."