Failing the Agility Test - Most Companies Not Driving Cost Reductions to Match Declines in Revenue, Profits 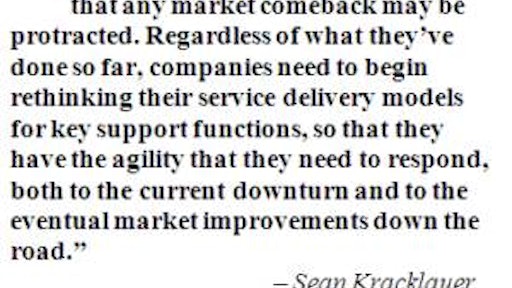 Atlanta — August 26, 2009 — The world's largest companies have for the most part failed in their efforts to reduce the cost of functions such as Finance, IT, HR and Procurement over the past year, exacerbating the impact of dramatic declines in revenue, profits and earnings, according to new research from The Hackett Group.

Hackett's analysis of the latest financial results of nearly 200 of the 1,000 largest public companies in the world that have reported Q2 2009 financial information showed that only one company in four was able to manage their selling, general and administrative (SG&A) costs in line with revenue reductions over the past 12 months.

While these companies saw average revenue reductions of 23.7 percent, they were only able to cut SG&A costs by 6.7 percent. As a result, SG&A costs as a percentage of revenue for Global 1000 companies have risen significantly over the same period, going from 12.6 percent of revenue to 15.5 percent of revenue. Hackett's research found that typical Global 1000 companies (with $26 billion in annual revenue) are losing out on up to $1 billion in annual cost savings as a result of this lack of agility.

Hackett's research spotlights Caterpillar as one company that has maintained a long-term focus on agility and is taking steps to reduce costs during the current economic downturn. In 2005, Caterpillar began preparing plans to manage the company during a recession as part of its corporate strategy. That foresight is paying off as Caterpillar's SG&A expenses for its principal machinery and engines businesses are expected to decline about 25 percent in 2009. Those reductions exclude the impact of the recent addition of Caterpillar Japan Ltd.

"Agility is a competitive weapon that has become a requirement in today's marketplace, where hyper-global competition and economic uncertainty reign supreme," said Hackett Chief Research Officer Michel Janssen. "Companies should have been able to rapidly reduce their overall G&A costs to more closely match the revenue reductions they are seeing."

However, Janssen continued, despite plenty of "tough talk" about freezing discretionary spending and making across the board cuts, most companies appear to have failed in their efforts to manage their G&A cost structures. "This trend has been getting worse each quarter, with the 'agility gap' growing wider," the research said.

Sean Kracklauer, Hackett's president of advisory services and research, said that Caterpillar offers a good example of what companies can accomplish by focusing on agility. And, the good news for most companies, according to Kracklauer, is that it's not too late.

"Most business leaders are now reconciling themselves to the fact that any market comeback may be protracted," Kracklauer said. "Regardless of what they've done so far, companies need to begin rethinking their service delivery models for key support functions, so that they have the agility that they need to respond, both to the current downturn and to the eventual market improvements down the road."

Hackett's research identifies eight key areas where companies can take action to evaluate their G&A service delivery model and make structural and organizational changes to drive agility improvements. According to Hackett, companies should:


Hackett's research was based on an analysis of Q1 public filings of nearly 500 of the 1000 largest public companies in the world, based on revenue, and Q2 public filings by nearly 200 of those same companies that have reported financial information so far.

A download of this research is available free, with registration, from Hackett www.thehackettgroup.com/agility.