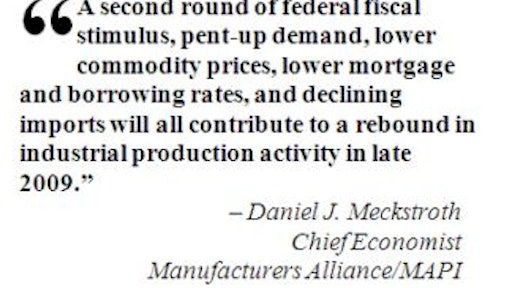 Arlington, VA — February 24, 2009 — While the U.S. recession has intensified in the past three months, and as financial contagion spreads to other regions of the world, a harsh 2009 may give way to a moderate rebound in 2010, according to the Manufacturers Alliance/MAPI "U.S. Industrial Outlook: Accelerating Decline" report analyzing 27 major industries.

"It is clear that a global recession is in progress," said Daniel J. Meckstroth, chief economist for the Manufacturers Alliance/MAPI and author of the analysis. "A severe recession among our global partners has caused exports to decline, thereby removing a previously positive support to the economy, particularly to the manufacturing sector.'

Fortunately, Meckstroth sees an eventual end to the current recession, perhaps by late 2009. "A second round of federal fiscal stimulus, this time of major proportions; growing pent-up demand as spending is postponed; lower commodity prices, particularly oil; lower mortgage and borrowing rates resulting from Federal Reserve monetary stimulus; and declining imports will all contribute to a rebound in industrial production activity in late 2009," he said.

On an annual basis, MAPI forecasts manufacturing production to fall 9 percent in 2009 and grow 3 percent in 2010.

The report also offers economic forecasts for 24 of the 27 industries for 2009 and 2010. The recession in the manufacturing sector is expected to last throughout this year, with MAPI forecasting only one of 24 industries to show gains; aerospace products and parts is predicted to grow by 7 percent in 2009.

A turnaround is anticipated to begin in 2010, with 19 of 24 industries expected to expand, led by housing starts at a healthy 84 percent increase. While no other industry is forecast to grow by double digits in 2010, 14 are expected to increase between 4 percent and 6 percent.

Four industries are expected to experience negative change in both 2009 and in 2010, with mining and oil and gas field machinery showing the most weakness. The industry is expected to decline by 13 percent in 2009 and by 24 percent in 2010. The others are domestic electronic computer equipment (16 percent decline in 2009, 13 percent in 2010), private, non-residential construction (12 percent and 17 percent, respectively), and electrical equipment (10 percent and 1 percent, respectively).