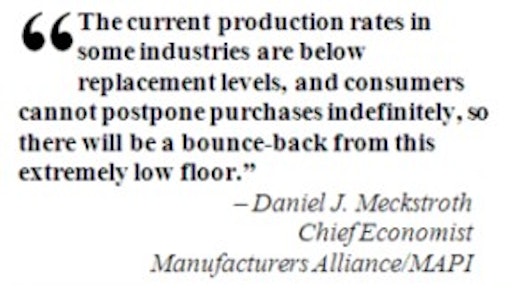 Arlington, VA — February 19, 2009 — The U.S. economy continues to decline, and any recovery promises to be long and arduous. Yet, assuming businesses and consumers find a way through the painful beginning of 2009, there is potential for improvement in late 2009 and into 2010, according to a new report from The Manufacturers Alliance/MAPI.

The industry group's "Quarterly Economic Forecast" report predicts that inflation-adjusted gross domestic product (GDP), which grew by a miniscule 1.3 percent in 2008, will decline 2.1 percent in 2009 before rebounding to 2.2 percent growth in 2010.

The GDP forecast for 2009 in the current MAPI report is double the previously anticipated 1 percent decline for this year projected in the November 2008 release. By supplying major assumptions for the economy and running simulations through the IHS Global Insight Macroeconomic Model, the Alliance generates unique macroeconomic and industry forecasts.

"We are in the midst of a very severe global recession in manufacturing which looks to be the worst recession since 1973-74 in terms of depth and duration," said Daniel J. Meckstroth, Manufacturers Alliance/MAPI chief economist. "Manufacturing did not create the problem but is paying the price for the problems that began in the financial markets."

Meckstroth indicated that the aforementioned recession lasted from December 1973 through March 1975. The current recession is widely agreed to have started in December 2007. MAPI economists believe it may be late in 2009 or in 2010 before the economy can be seen as stabilizing.

The forecast expects industrial equipment expenditures to decline by 19.2 percent this year and to further decline by 6.4 percent in 2010. Volatility is in the outlook for spending on transportation equipment. The report calls for a 29.8 percent decline in 2009 followed by a 53.3 percent increase in 2010.

Spending on non-residential structures is expected to retrench over the next two years, declining by 16.3 percent in 2009 and by an additional 14.9 percent in 2010.

Exports and imports will both take a substantial downturn in 2009. After increasing by 6.5 percent in 2008, inflation-adjusted exports should decrease by 8.3 percent in 2009 before experiencing 1.2 percent growth in 2010. Imports are expected to decline by 10.8 percent this year and to increase by 7.1 percent next year. The reduction in labor force will continue as the current MAPI forecast anticipates unemployment to average 8.5 percent in 2008 and 9 percent in 2010.

In spite of the somber forecast overall, Meckstroth sees some daylight, perhaps in fourth quarter 2009 or in 2010.

"There are some positives," he acknowledged. "The decline in oil prices is like a $230 billion tax cut to consumers, and personal tax cuts in the fiscal stimulus will, to some degree, offset the falling house prices. The current production rates in some industries are below replacement levels, and consumers cannot postpone purchases indefinitely, so there will be a bounce-back from this extremely low floor."

He added: "The fiscal and monetary stimulus is geared toward job creation, which should mitigate some of the job loss, and low interest rates will help with mortgages."