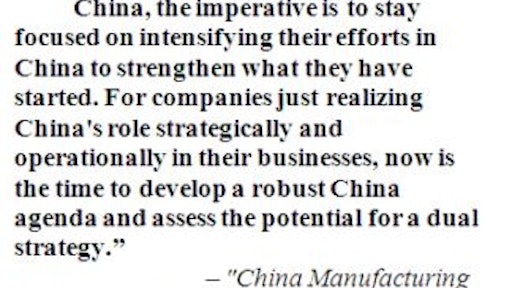 New York — March 10, 2009 — While the latest close encounter between U.S. and Chinese naval forces serves as a reminder that China is a growing military, as well as economic, power in the Asian region, a recent study of multinational corporations operating in the Middle Kingdom points to a strengthening commitment to the Chinese market by these companies despite the latest economic, let alone military, tribulations.

Rising costs, declining rates of domestic growth and decreased demand for Chinese exports are pressuring multinational corporations that operate in China, but the global business community increasingly views China as an essential player in an eventual turnaround and, as a result, multinational manufacturers have strengthened their commitment to China as a key base of operations for Asia, according to a study conducted jointly by the American Chamber of Commerce in Shanghai (AmCham Shanghai) and management consulting firm Booz & Company.

The survey of 108 foreign-invested manufacturing companies operating in China found that unemployment and softer consumer demand, especially from the developing middle class, led to a decline in domestic sales and exports among 40 percent of survey respondents. Still, the second annual "China Manufacturing Competitiveness 2008-2009" study found steady evolution in the manufacturing sector and a resounding commitment among multinational corporations (MNCs) to remain in China and expand operations.

Despite the challenges of the downturn and steadily increasing manufacturing costs, the MNCs surveyed were fairly optimistic about China's efforts to position itself as a world-class manufacturing center. Government focus on manufacturing infrastructure development and product safety improvement, coupled with more MNCs upgrading their manufacturing facilities, has reduced interest in locating manufacturing operations in lower-cost countries like India and Vietnam.

"China is not immune to the pressures of the recession, and many operations here are definitely starting to feel pain, like most everyone in the world," said Kaj Grichnik, a partner with Booz & Company. "However, even though costs of operation in China have risen, government investments in infrastructure and product safety are paying off, as manufacturers increasingly commit to professionalizing their operations here. And so we may also see a beneficial impact of the crisis: more attention to how we manufacture in China versus how much we manufacture"

Brenda Foster, president of AmCham Shanghai, said: "China's focus on meeting global manufacturing needs and trade benchmarks in spite of the economic downturn has led to remarkable changes among manufacturers, both in technological improvements and in their market opportunities, both domestically and abroad. We're seeing a deeper commitment among multinationals to make China the focus of their Asian presence."

Easing cost pressures and continuing improvement of China's image and ability to meet global production and trade benchmarks were recurring areas of interest among survey respondents. Among the study's key findings:

Effects of the downturn: In spite of prospects for robust growth, the worldwide economic downturn has negatively impacted China's domestic market. Consumer demand in Western countries has tumbled, which has placed downward pressure on the country's export market, while domestic sales are also softening significantly, leading to a significant decline in domestic sales and exports. As a result, the majority of respondents felt it was important for the Chinese government to ease cost pressure on local manufacturers, in addition to focusing on worker training, education and job creation.

Committed to China: Despite the downturn, doing business in China is becoming more expensive. However, even as companies report rising costs in China — by as much as 15 percent this year compared to 10 percent last year, centered primarily on labor and management — fewer companies expressed an interest in relocating their manufacturing facilities out of China in the next five years (10 percent this year versus 17 percent last year). The number of companies that expressed concern about China losing its competitive edge to lower-cost countries like India and Vietnam fell by more than half. Nearly 50 percent of respondents expressed an interest in growing their mainland China production capacity over the next couple of years.

Best practices are no longer a luxury: This year's survey incorporated new questions about implementing production technology and found that nearly 25 percent of respondents were upgrading their Chinese facilities with state-of-the-art technology. At the same time, the Chinese government has made efforts to improve industrial infrastructure, as it continues its quest to become a higher-value manufacturing location. Overall, this has led to a significant trend in the Chinese manufacturing sector to incorporate greater innovation across the board, ultimately resulting in greater performance and competitive advantage. Best practices, such as advanced statistical forecasting, lean systems and optimized product flows, are more prevalent than ever before, with 39 percent of companies adopting some aspect of these practices versus 27 percent last year.

Success lies in China's duality: The most successful MNCs harness the dual opportunities of China as a source of exports as well as a huge domestic market, compared to their competitors whose narrower objectives were typically either taking advantage of labor advantages on a limited scale or only importing products into China's growing domestic market. A dual strategy — pursued by 57 percent of respondents, up from 47percent a year ago — integrates both sales and sourcing strategies. The study also found that key opportunities for MNCs in bolstering the soft domestic market include expanding product and service offerings to meet middle- and local-market demand.

According to Booz & Company and AmCham Shanghai, the survey findings indicate that developing strong manufacturing capabilities in China is central to MNCs achieving a stronger competitive position across their global supply networks, particularly in the current economic climate.

For companies that are already on this path, the imperative is to stay focused on intensifying their efforts in China to strengthen what they have started. For companies just realizing China's role strategically and operationally in their businesses, now is the time to develop a robust China agenda and assess the potential for a dual strategy.

Further, determining the right manufacturing strategy in China is strongly related to the advantaged capabilities that companies strive to develop. Across a broad set of manufacturing best practices, the most successful companies do not try to adopt all capabilities; rather, they focus only on those practices that are most relevant to how they seek to drive success in the market.

Using a combination of online surveys, onsite visits and in-depth interviews, the AmCham Shanghai and Booz surveyed 108 manufacturing companies doing business in China about their perceptions of China as both a sales market and production center for domestic distribution and exports.

As the global economic downturn worsened in November and December, follow-up questions were posed to these companies to gauge the impact of the worldwide recession on their Chinese strategies. Of the companies surveyed, 82 percent were wholly owned by foreigners, 11 percent were joint ventures between multinationals and Chinese partners, and 7 percent were categorized as "other."