Panjiva analysis shows nearly half of large U.S. buyers doing business with troubled global manufacturers; "they never even tell you they are in trouble...they just disappear" 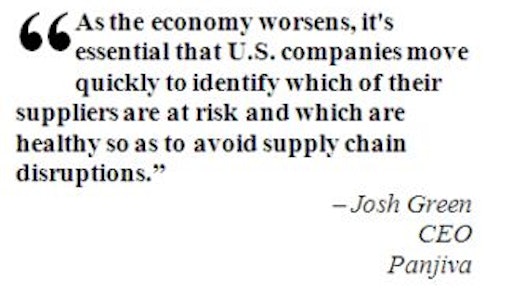 New York — March 11, 2009 — Nearly half of large U.S. buyers across industries are doing business with troubled global manufacturers, potentially putting their supply chains at risk for significant disruption, according to a new report from supply chain risk management specialist Panjiva.

Panjiva maintains a Manufacturer Watch List as part of its alert service, which aims to help U.S. buyers across a wide range of industries manage the risk of doing business globally by distinguishing between risky manufacturers and healthy suppliers of goods and materials.

To be added to the Watch List, manufacturers must suffer a 50 percent or greater decline in volume shipped to American customers in the most recent three month period, versus the same period a year ago.

By analyzing U.S. Customs data on shipments from significant overseas manufacturers to significant U.S. buyers — those who send or receive 10 or more shipments a year — Panjiva concluded that nearly half of significant buyers (47 percent) have done business with a Watch List supplier within the last six months.

In addition, over a third of significant buyers (38 percent) have done business with a Watch List supplier in the past three months, and over a quarter (28 percent) of all significant manufacturers that Panjiva tracks are on the Watch List.

Panjiva CEO Josh Green said that these numbers reveal that a startlingly high number of U.S. companies are doing business with troubled manufacturers. "Unfortunately, many of these buyers may not even be aware of the risk they're facing," Green said.

On Panjiva's blog, the company notes that it shared the new statistics with "a supply chain manager at a major retailer," who suggested that the numbers seemed "reasonable...given the number of suppliers I've seen go bankrupt recently." The supply chain manager added, "the worst part is, they never even tell you they are in trouble or gone...they just disappear."

"As the economy worsens, it's essential that U.S. companies move quickly to identify which of their suppliers are at risk and which are healthy so as to avoid supply chain disruptions," Green said.

Panjiva, which works with companies like big box home improvement retailer Home Depot, offers a suite of services to help organizations manage risk, including its Alerts service that flags suppliers at risk of going under and a Search service to identify new healthy suppliers of goods and materials.

Panjiva's patent-pending technologies, developed under the leadership of Panjiva Co-founder and Chief Technology Officer James Psota, a computer scientist from MIT, assess aggregate risk in the global supply chain by analyzing waterborne shipments to U.S. customers, tracking manufacturers that are serving the American market. For each manufacturer, Panjiva tracks changes in volume over time. The results are released on a monthly basis.