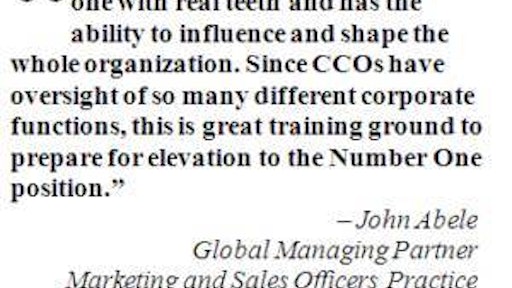 New York — July 29, 2009 — A specter is haunting the corner offices of Corporate America, the specter of a new C-level executive position.

"An important new power center is emerging in the C-suite — the chief commercial officer," says John Abele, global managing partner of the marketing and sales officers practice at executive search firm Heidrick & Struggles and co-author of a new Heidrick white paper, "The Rise of the Chief Commercial Officer."

Filling a Void in the C-suite

"We've seen a dramatic increase in organizations looking for a single executive leader at the right hand of the CEO whose sole job is to drive growth and ensure integrated commercial success," says Abele. "Companies are looking for one person who can own this responsibility as it touches all divisions — from sales and marketing to customer service and product development — and they are hiring CCOs to fill this space."

Abele notes that in 2001, there were five CCO appointments at companies globally. But by 2008 that number had reached 56. And, with 36 appointments in just the first half of this year, 2009 will have the highest number of CCO appointments yet."

Customer Relationships at a Premium

"The explosion of many divergent sales channels, especially the digital channel, has forced companies to think differently about their customers and how they interact with them," says Abele. "Companies can no longer separate direct sales versus retail versus online, but must look at the customers as a whole, and manage these interactions cohesively."

Ultimately, Abele says, the buck stops with the CCO. "Since CCOs have ownership of so many different parts of the company, they can be the single person that the CEO turns to to make things happen."

CCO as Natural Successor to CEO

The emergence of the CCO has also made an impact on succession planning, Abele adds. Companies are using the role of the CCO both to attract talent from the outside and to entice internal candidates to stay with the company in this role as a kind of "CEO in training."

"Offering the CCO position as a carrot is a way to attract general managers with strong functional skill sets into a role that goes beyond being 'staff' or functional alone," Abele says. "A CCO role is one with real teeth and has the ability to influence and shape the whole organization. Since CCOs have oversight of so many different corporate functions, this is great training ground to prepare for elevation to the Number One position."

The Heidrick & Struggles report "The Rise of the Chief Commercial Officer" currently is available (no registration currently required) here.