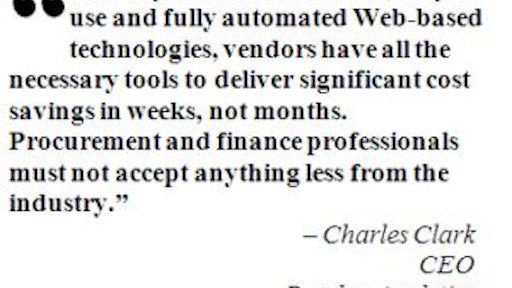 London — July 24, 2009 — A majority of procurement executive do not know if and when a spend analysis solution should deliver a return on investment, according to a survey of 100 U.K. procurement and finance executives.

The survey, conducted by Rosslyn Analytics, a technology company, revealed that 51 percent of respondents were unable to determine the return on investment for spend analysis. The survey also uncovers that though procurement and finance leaders view identifying cost savings as their number one business priority, they cite the lack of data quality (34 percent) as the largest obstacle to obtaining an accurate view of their company's spend intelligence.

"The findings from our survey reveal that spend analysis vendors are taking advantage of procurement leaders who, confidentially, admit that they do not know when they should realize a return on investment," said Charles Clark, CEO of Rosslyn Analytics. "Spend analysis is such an important business-critical tool for organizations that Rosslyn Analytics challenges vendors to become more accountable to customers, including transparently stating when their solutions will deliver returns on investment."

In the study, 57 percent of respondents said they view identifying cost savings as their number one business priority, followed by increasing profit margins (29 percent), managing supply risks (12 percent) and other (2 percent).

Among procurement executives, 33 percent cited lack of data quality as their number one internal obstacle to the adoption of spend analysis, followed by lack of stakeholder buy-in (26 percent), lack of budget (23 percent) and lack of understanding of spend analysis (17 percent).

Six in 10 (61 percent) of those surveyed leverage spend analysis to identify greater saving opportunities within categories. The next three most cited benefits of spend analysis, for both roles, are negotiating lower supplier contracts (14 percent), improving information on contract compliance (8 percent) and managing supplier performance (5 percent).

Just over half (55 percent) of respondents rank a lack of time in the day as their top pain point, followed by additional time-sensitive issues (23 percent), such as team meetings, communicating with stakeholders and prioritizing tasks. Other (22 percent) pain points most frequently cited were people management and a lack of training.

"There is no reason why organizations should not know exactly when their spend analysis solution will deliver a return on investment," Clark said. "In today's era of affordable, easy-to-use and fully automated Web-based technologies, vendors have all the necessary tools to deliver significant cost savings in weeks, not months. Procurement and finance professionals must not accept anything less from the industry."