Leading figure offers hope of positive growth ahead, but AMT-AMTDA index shows IT spending by U.S. manufacturers still down significantly against 2008 figures 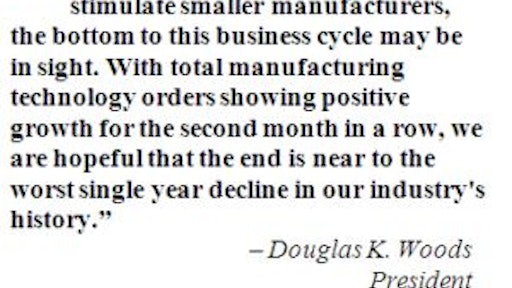 McLean, VA — August 10, 2009 — U.S. manufacturers opened up their wallets and boosted their investments in technology as the second quarter of the year ended, but spending on IT in 2009 is still down markedly from last year, according to the latest United States Manufacturing Technology Consumption (USMTC) report.

These numbers and all data in this report are based on the totals of actual data reported by companies participating in the USMTC program.

"Despite the lack of government programs designed to specifically stimulate smaller manufacturers, the bottom to this business cycle may be in sight," said Douglas K. Woods, president of AMT. "With total manufacturing technology orders showing positive growth for the second month in a row, we are hopeful that the end is near to the worst single year decline in our industry's history."

U.S. manufacturing technology consumption is also reported on a regional basis for five geographic breakdowns of the United States. June manufacturing technology consumption in the Northeast Region totaled $26.78 million, 6.0 percent less than the $28.48 million tally for May and off 56.3 percent when compared with June a year ago. The $154.78 million year-to-date total is down 56.7 percent when compared with the same period in 2008.

More information on the report can be found here.