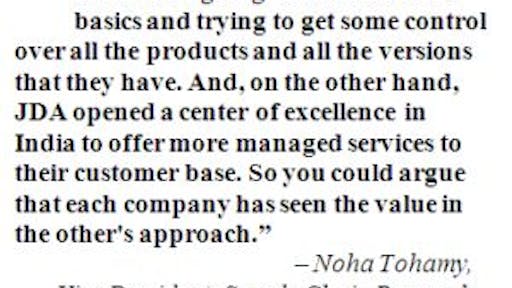 The Power of Automated Planogram Generation for Individual Users

Closing the Technology Gap: The Biggest Challenge for 3PLs

Expect to see repercussions of recent disruptions like China’s energy crisis, the chip shortage, labor shortages and more to unfold and run their course throughout 2022.
Supply Wisdom
January 25, 2022

The recovery in activity across U.S. supply chains continues to track at a significantly higher level than the rest of the world.
Tradeshift
January 21, 2022

Act With Caution When Fixing Contracts

Economic indicators such as new orders and manufacturing activity have lost momentum since May 2021, highlighting a potential slowdown in economic growth.
Mintec
January 21, 2022

By being predictive, not just proactive, in strategic inventory positioning, workforce planning and collaborative forecasting, you can maintain a robust and high-performing supply chain and ensure a prosperous 2022.
KPMG
January 20, 2022

The decision to outsource indirect procurement is not all-or-nothing. The key is to understand how to derive the most value from the outsourcing relationship.
4C Associates
January 1, 2022
Follow Us