The Alpaca stuffed pillows are sourced and manufactured in the USA. 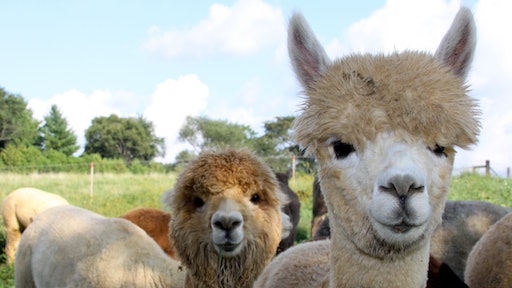 Mary Anderle’s life changed when a firefighter took the stage at an interior design seminar, pleading for everyone to change their ways.

“I was sitting in the front row thinking ‘Why is he here?’” Anderle says. “He told us that he was the fire chief in the area and that he couldn’t save people anymore because of material found in their homes. I just sat there with my mouth open—it scared me. I went home and thought about how I could prevent it.”

The fireman continued to explain that memory foam pillows were among the first things to burn up in a house fire because of all the chemicals they contained. Owning a memory foam pillow back at home, Anderle knew she needed to replace it, but wanted to do it her own way.

An interior designer by trade, she used her background to find fabrics and fibers that were natural and more flame resistant to make a new pillow. She experimented with several materials before finally striking gold with alpaca wool.

“I looked at wool first, but then I saw alpaca. I’ll admit it, I had no clue what an alpaca was at first,” she says. “I was fascinated. The more I read about the animal, the more I wondered why we weren’t using this material.”

Anderle explains that she found herself working on an alpaca ranch to learn more about the animal and how to experiment with the wool.

“When I first started at the ranch the farmers were throwing away at least half of the fiber. They were only using the finer fibers, so I would see bags laying all over the barn for later disposal,” Anderle says. “They had no use for this ‘low grain’ fiber, so I decided to take it myself.”

Anderle spent a year working with the fiber, learning how to wash it for better use in pillows than other high-quality materials. As her pillows started to grow in popularity among her clients, she was encouraged to market them despite her successful interior design business. Thinking back on what the fireman said during the seminar, she knew what needed to be done, and Malpaca was born.

“I learned to listen to my gut, and my gut was reminding me of the impact of that fireman’s message,” she explains. “I couldn’t walk away from this animal. I kept telling myself that I had to do this. I just had to trust my gut.”

Malpaca has become Anderle’s full-time gig. The pillows are 100-percent natural, hypoallergenic and naturally fireproof. As the pillows range in price from $180 to $250, the orders usually vary on the time of year.

She explains that it takes an entire alpaca to make a single pillow. Wool is collected from all across the country. Because farmers only shave the animal once a year—typically during the summer months —she can’t rely on having just one supplier but many.

“The business started at my kitchen table with bags of alpaca fur all around my house,” Anderle says. “Now I have a manufacturing plant in Minnesota and in Indiana…I learned that there’s always someone that’s willing to help you. When I first started, I had no idea what I was doing. I didn’t understand trademarks and patents, but I do now.”

Since opening Malpaca in 2011, Anderle has branched off and also started selling mattress pads. But because each product is handmade, she doesn’t see herself expanding any further, especially if she wants to remain in control of the entire supply chain process. From the ranch, all the way to the packaging process, Anderle oversees every detail along the way.

“Look for a manufacturer that has the same values as you,” Anderle advises. She has had many offers from overseas manufacturers, but she prefers the assurance that U.S. manufacturers are able to offer. She stresses that she will always make her products in the United States.

“They [U.S. manufacturers] ensure each pillow is done right. It’s that personable mind-set of work, and you can only get that here,” she explains. “It’s more of that old mind-set of ‘you’re there, you work there, you know the people there.’ It has your personal stamp on it when you leave. That’s the difference between U.S.-made and products produced outside the country.”

Quench Your Thirst with Liberty Bottleworks