An Inside Look at the Mobile Device Supply Chain

What happens when they take your mobile phone to the back room? An expert explains what, for many, is a mysterious process. 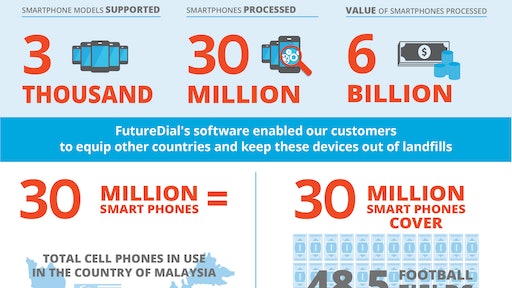 Eventually it happens to everyone with a mobile phone. Something is wrong with your device, so you take it to the store where you bought it to either repair or replace it. The attendant at the store takes a look, but eventually your phone goes out of sight for “processing.” You forget about it for the time being, because they’ve given you a loaner or a replacement. But the question still lingers in your mind. What exactly happens to a phone when it is taken to the back room?

As an executive with FutureDial, one of the leading mobile device clearing companies in the world, I’d like to shed some light on this mystery.

There are several options for a dealer after a defective unit is handed over or traded in. Of course, if the store can repair and return your phone in a timely manner, they will do so. If it cannot be repaired, the unit likely will be sent to a processing center where it will be tested and evaluated.

It is not widely known, but the devices given to the consumer as a replacement are usually refurbished units from previous consumers. If an originally traded in device has low damage and use, it often will go through cosmetic updates, such as a screen repair or audio replacement. They are then given “like new” to another customer. Of course, all phones are data cleared for security and regulatory purposes.

Older units often can end up overseas in a secondary sales market. These devices will be tested to make sure they still function. If so, the data will be cleared, and they will be updated with the latest software before being sold to consumers through after-market outlets. This market is much bigger than many people realize. A November 2016 forecast from International Data Corporation (IDC) estimates that the market for used smartphones will grow from 81.3 million devices in 2015 to 222.6 million units in 2020, representing a compound annual growth rate of 22.3 percent.

If the device is broken beyond repair or extremely outdated, it is usually sent to a downstream recycler, where it is melted down and destroyed to ensure that none of the data on it can be uploaded. Even with this final option, the unit has to be handled properly. Recyclers have to be certified, as they are still dealing with sensitive data.

It is worth noting that the resale of used phones has had a dramatic impact on the number of devices ending up in landfills. In 2016, FutureDial alone processed 30 million devices, enough to cover the entire land mass of Australia (see graphic).

Hopefully, this brief overview provides more insight into a mysterious process. Of course, each of these options has its own set of standards, regulations and decisions that go into the final destination of your phone. This is a fascinating story not often told to consumers.

Mobile Devices Dominate the Retail Industry: How Retailers Should React

The Mobile Device Renewal Industry Gets a Leg Up Through Automation