Robots That Pick Up and Sort Objects Created for Simplifying Warehouses

Researchers have developed a robot that can pick up and sort objects to help improve warehouse efficiency. 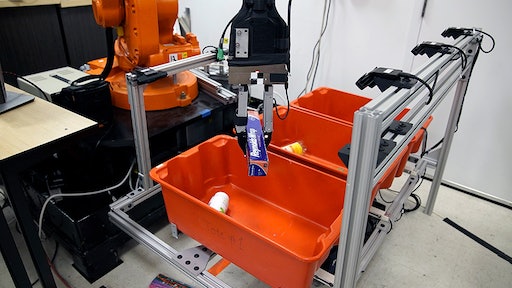 Sorting and organizing may not always be the most difficult tasks, but they can certainly get tedious. While it has been difficult in the past to teach machines to do that task, researchers at MIT and Princeton have developed a robot that can do it just that. In the future, it could be used for things like warehouse sorting or cleaning up a disaster area.

The team first trained the robot how to determine the best way to grip an object. They showed it bins of various items and then demonstrated which of four main grasping behaviors was the best option for a particular object. They did this over and over again, labeling which attempts were successful and which were not. Eventually, they plugged all of the information in a deep neural network.

Once the object is gripped and lifted out of the bin, the robot then has to figure out what it is. In their setup, the researchers have a set of cameras that take pictures of the object from all sorts of angles and those images can then be compared to a library of other images the robot has access to. Once it finds a close match, the robot then moves the object to another bin, based on what the item is.

At the Amazon Robotics Challenge last July, the robot was able to successfully grasp objects 75 percent of the time and it correctly classified each novel item it was presented with.