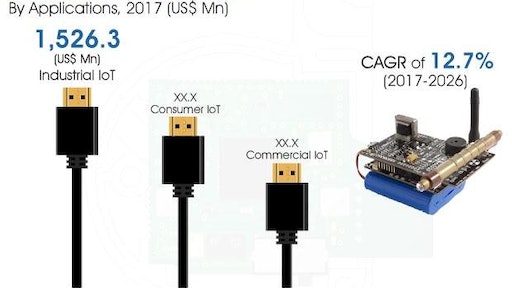 Organizations and industries have been utilizing different sensors for a while, however, the invent of the internet of things has participated as sensors along with developments of sensors to an entirely unusual level. By blending an arrangement of sensors along with a communication network, the devices can share data with each other and are enhancing their functionality and effectiveness. There are a variety of types of IoT sensors in the market such as temperature, pressure, magnetometer, humidity, gyroscope, accelerometer, image and inertial.

In the automotive segment, most sensors on a car record their view of the surroundings and transfer that data into databases. The information is then processed and all the vital new snippets of data are sent to every other vehicle. This is a progressing procedure, through which the vehicles are getting to be consistently smarter.

In the manufacturing segment, IoT sensors are utilized to diminish the cost of making along with the cost of upkeep and decrease the utilization of wastage of materials and energy.

The key aspects fuelling the expansion of the IoT sensors market comprise increasing demand for smart devices, supportive government initiatives of the various developing nations, advancements in sensors themselves, requirement for real-time computing of applications, strong requirement in the automation industry, expansion of smaller, smarter and cheaper sensors, expansion in the automotive industry as well as purpose of sensor fusion perception in IoT sensors market.

Register
Join us to hear about Qualcomm’s journey in leveraging a technology-enabled concurrent S&OP process to support unprecedented growth in the face of many global headwinds.
Kinaxis Inc.GenpactQualcomm
Follow Us