The e-Trade for All initiative supports developing countries that express an interest in boosting e-commerce. 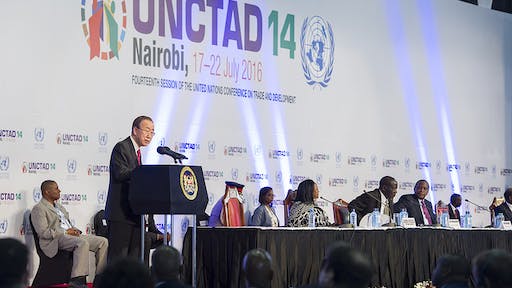 United Nations Secretary-General Ban Ki-moon at the Opening Ceremony of UNCTAD 14 in Nairobi on July 17, 2016.

Developing countries should grasp the rapidly growing opportunity of electronic commerce—e-commerce—worth around $22.1 trillion in 2015, up 38 percent from 2013, or risk falling quickly behind, the United Nations Conference on Trade and Development (UNCTAD) said at the launch of a new e-commerce initiative.

By providing new opportunities and new markets, online commerce can help generate economic opportunities, including jobs. But while more than 70 percent of people are shopping online in Denmark, Luxembourg and the United Kingdom, the story is different in most developing countries. In Bangladesh, Ghana and Indonesia, for example, just 2 percent or less of the population buy online.

“A huge divide is opening between countries that are exploiting those opportunities and those that are not,” UNCTAD Secretary-General Mukhisa Kituyi said ahead of the initiative’s launch at UNCTAD 14.

E-commerce includes both business-to-business (B2B) and business-to-consumer (B2C) markets, respectively valued at around $19.9 trillion and $2.2 trillion each, according to the new UNCTAD data. This trade is mostly domestic, but is becoming more and more international.

The new UNCTAD data shows that e-commerce is growing rapidly, with emerging economies accounting for most of this growth. China is now the world’s largest B2C e-commerce market, both in terms of sales and in number of online shoppers. Brazil, India, the Republic of Korea and the Russian Federation also all moved into the top 10 e-commerce markets.

“I am delighted by this collaboration with our partners, which finally gives the global community an effective platform for helping developing countries access and benefit from e-commerce,” Dr. Kituyi added.

With strong involvement by the private sector—through a new Private Sector Advisory Council—and with financial contributions from the governments of the United Kingdom of Great Britain and Northern Ireland, Sweden, Finland and the Republic of Korea, the e-Trade for All initiative will support developing countries that express an interest in boosting their online commerce.

In this way, the initiative will also support the December 2015 call by the United Nations General Assembly to better use information and communication technology to facilitate achievement of the sustainable development goals.