OnTrac, a parcel logistics company in the Western United States, celebrated the grand opening of its first automated hub on February 20. 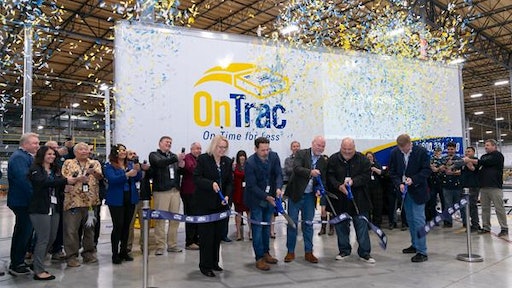 OnTrac, a parcel logistics company in the Western United States, celebrated the grand opening of its first automated hub on February 20. The ribbon-cutting ceremony at the new 33-acre, 183,000 square foot facility, marked the company's fifth expansion of its Reno operation since adding Nevada to the OnTrac service area in 1996. Customers, vendors, and city and state dignitaries attended the celebration, which highlighted the modern methods used for the building's construction, and the high-speed sorting capabilities of the new material handling system.

OnTrac also received accolades from the community for the expansion. The Reno+Sparks Chamber of Commerce presented a Welcoming Recognition, as well as a Commendation from Senator Catherine Cortez-Masto. Ward 4 Councilmember Bonnie Weber read a Proclamation from Mayor Hillary Schieve, declaring Thursday, February 20, 2020, as "OnTrac Day" in the city of Reno, and Congressman Mark Amodei presented a Congressional Recognition and thanked OnTrac for its renewed commitment to the businesses of Northern Nevada.

OnTrac Chairman and CEO Robert E. Humphrey, Jr. concluded the ceremony by thanking OnTrac customers for their continued support. "We're committed to growing with our customers, and this facility is the next evolution of that promise," said Humphrey. "The automated sorting system will help us process more packages and continue to provide shippers a competitive advantage for their e-commerce deliveries."

Humphrey also acknowledged the City of Reno and the Economic Development Authority of Western Nevada (EDAWN) for their help in making the project possible. Reno's business-friendly environment and centralized access to the Western United States were crucial factors in the decision to expand the OnTrac facility. "From Reno, our customers can reach seven of our eight-state network in one day. They can offer overnight service to the West Coast from just one distribution center in Reno, Nevada. That's next-day residential delivery for the price of ground shipping and a huge boost to their bottom line."