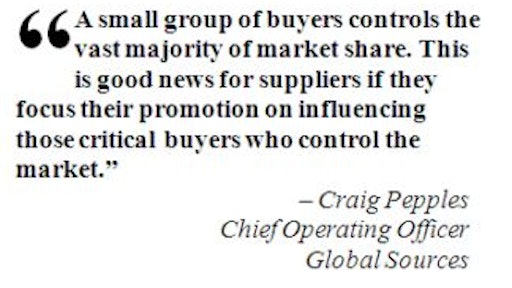 Concerns over supplier stability and changing product requirements are driving up the frequency of buyer communication with suppliers, and a small group of major buyers remain in control of the vast majority of imports in developed markets such as the U.S., according to Global Sources' "2009 Importer Survey," completed this month.

"Close to 50 percent of surveyed buyers expect to maintain or increase their total import value in 2009," said Craig Pepples, Global Sources' chief operating officer. "We see a slight decrease in average price per item, and we know today's buyers require more flexibility in terms of order size. But China remains at the center of their sourcing plans, with 57 percent of surveyed buyers expecting to increase or maintain their total value of imports from China in 2009, as compared to 2008."

The survey also indicated that buyers are reviewing all their options and sourcing more cautiously to reduce risk. Among surveyed buyers:


Buyers are also using a wide range of methods to find suppliers:

Pepples said that as buyers change the way they source, suppliers must also change the way they operate to win orders. "Buyers are submitting more inquiries than ever before, as indicated by the Survey. Metrics from Global Sources Online confirm this. Buyers sent about 18 million inquiries to suppliers in the fourth quarter of 2008, up 119 percent from the same period a year earlier."

He added that, with buyers looking at more options for each purchase, suppliers must work harder to win the order. "They must submit more competitive bids and lower minimum order requirements. Moreover, as more cautious buyers use a wider range of channels to find products, suppliers also need to promote themselves across more of these channels to get buyers' attention."

A small number of buyers control developed markets, according the Global Sources. "The 80/20 rule applies in many markets," said Pepples, citing a related study of the U.S. import market in 2008. "A small group of buyers controls the vast majority of market share. This is good news for suppliers if they focus their promotion on influencing those critical buyers who control the market."

Key findings of the U.S. import market study include:


Pepples said: "This is the first-ever report giving such in-depth analysis of the U.S. buyer universe, and it supports what we have been telling our suppliers all along. In today's challenging times, it is even more important for exporters not to waste time and energy influencing those without real buying power."