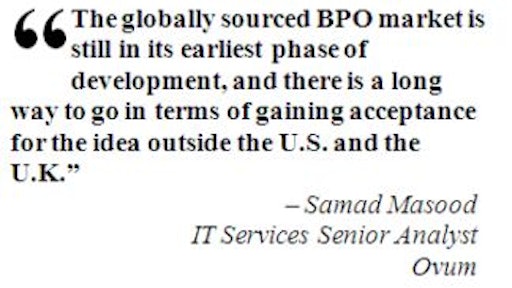 London — April 28, 2009 — In the past few years, the offshore services industry has increasingly referred to itself in the terms of "global sourcing," where low-cost offshore resources are sourced from multiple onshore and offshore locations, rather than just India.

Today, the low-cost offshore delivery model for business process outsourcing (BPO) is well established in the U.S., U.K. and Indian IT services industries, and several offshore heritage players rise rapidly up the ranks to compete head-on with their more established and larger "onshore" competitors.

However, the "global sourcing" market is far from global currently and is predominately an "Anglocentric" landscape. This is according to the findings of "The Rise of Offshore BPO," a new report by global advisory and consulting firm Ovum.

Indeed, Ovum estimates that less than one-third of the volume of offshore services delivered globally originates from outside of India today due to a combination of historical and cultural factors. In Ovum's view, vendor capability for BPO in most alternative locations, particularly in Eastern Europe, Africa, China and Latin America, is still immature.

"Scalability challenges in these locations will require many vendors to build multiple alternative locations on each continent in order to thoroughly target the global sourcing opportunity" says Samad Masood, IT services senior analyst and author of the report. "For this reason, we do not see global sourcing becoming established as a consistent offering across vendors until well into the next decade."

Nonetheless, Ovum believes that this landscape will change rapidly due to the global economic crisis. "The downturn will accelerate adoption across Continental Europe, the Middle East and Asia Pacific as client organizations in these regions look — often for the first time — at BPO as a credible option to reduce costs and increase business agility," says Masood.

These new non-English-speaking clients will drive demand for services provision from alternate locations that better suit their businesses language and culture. As this occurs, vendors' propositions will evolve from a focus on "offshore" cost saving towards one of "globally sourced" process excellence — in other words, a market based on services sourced from "best-of-breed" locations, from either one or multiple collaborating vendors.

"However, despite this scenario, it is important to notice that the globally sourced BPO market is still in its earliest phase of development, and there is a long way to go in terms of gaining acceptance for the idea outside the U.S. and the U.K.," says Masood. "The long-term winners in this market will be those that manage to maintain growth in line with the market and innovate in terms of delivery capability and quality, all while balancing the books".

This will be a tough task, and the market could see more failures than successes among the vendor community before globally sourced BPO becomes truly established in the mainstream, according to Ovum.

So, while the consultancy doesn't agree with most vendors that true "global sourcing" exists today, it can be seen emerging rapidly over the next three to five years as the economic downturn kick starts non-Anglocentric adoption.

Ovum's report, "The Rise of Offshore BPO," tracks the rise of the offshore business process outsourcing phenomenon, analyzing the make-up of the current outsourced market and competitive landscape of vendors in the context of a globalizing services market faced with global recessionary pressures.

Ovum is part of the Datamonitor Group.