Manufacturers Alliance's composite index falls from 28 in December 2008 to 21 in March as manufacturing faces continued headwinds, companies respond to the sharp downturn 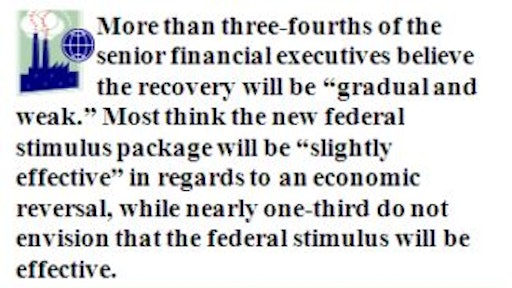 Arlington, VA — April 16, 2009 — The already battered manufacturing base appears headed for further decline, as the quarterly Manufacturers Alliance/MAPI Survey on the Business Outlook, a leading indicator for the industrial sector, registered a drop to 21 from the previous historic low of 28 reported in the December 2008 report, the alliance reported today.

At this level, the index indicates that overall manufacturing activity is expected to contract over the next three to six months. The index is at its lowest level since the survey originated in March 1972. The survey was conducted on a semi-annual basis from 1972 to 1991 before being conducted on a quarterly basis in 1991. It should be noted, however, that the index measures the direction of change rather than the absolute strength of activity in manufacturing.

The March 2009 survey marks the third consecutive quarterly reading below 50, the demarcation point between growth and contraction, and lies in stark contrast to an index of 57 just one year ago. Prior to the recent string of sub-50 readings, the last time the MAPI index was below 50 was when it registered 40 in December 2001.

"The extent of the decline in the individual indexes to such low levels in absolute terms is unprecedented in the history of the Business Outlook Survey," said Donald A. Norman, MAPI economist and survey coordinator. "Further, the decline in activity extends across the entire manufacturing sector."

While a variety of individual indexes are included in the survey, the business outlook index is a weighted sum of the shipments, backlogs, inventories and profit margin indexes.

Eleven of the 12 individual indexes measured in the survey fell to all-time lows, with only the inventory index spared. Norman notes that the responses were received during March 2009 and may reflect the worst of the crisis for manufacturers.

The non-U.S. investment index, which asks about companies' plans for capital spending outside the United States in 2009, experienced the most precipitous drop, falling from 40 percent to 14 percent. This index was added to the MAPI Survey on the Business Outlook in March 2008. The profit margin index gave back 24 percentage points, falling to 19 percent in March compared to 43 percent in the December report, marking the sixth straight quarter of decline.

The non-U.S. prospective shipments index, which measures expectations for shipments abroad by foreign affiliates of U.S. firms in the second quarter of 2009 compared to the same quarter of 2008, fell to 8 percent from 27 percent. Like the non-U.S. investment index, this was reported for the initial time in the March 2008 survey.

Finally, the backlogs index, which compared the first quarter 2009 backlog of orders with the backlog of orders one year earlier, fell to 14 percent from 21 percent in the December survey. An accumulation of backlogs usually occurs when new orders exceed shipments. A decrease in backlogs is yet another indication that overall manufacturing activity will fall over the next three to six months.

In reply to a related query on the recession and the outlook for recovery, more than 90 percent of the companies indicated that they are reducing their workforce and/or hours, capital expenditures and/or travel. As to potential indicators of a recovery, 30 percent of the respondents said it would be new orders/sales while 18.3 percent said it would be an increase in housing starts/home sales.

More than three-fourths of the senior financial executives, 77.8 percent, believe the recovery will be "gradual and weak." Most, 60.3 percent, think the new federal stimulus package will be "slightly effective" in regards to an economic reversal, while 31.7 percent do not envision that the federal stimulus will be effective.

The survey reflects the views on current and future business conditions of 67 senior financial executives representing a range of manufacturing industries.