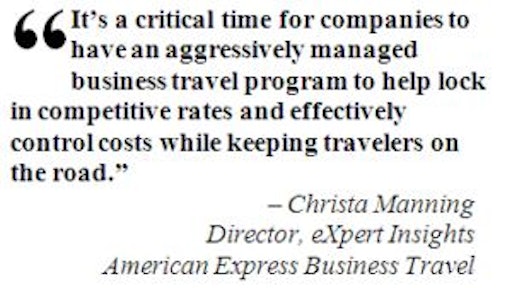 San Diego — August 28, 2009 — Domestic and international airfare rates are at their lowest point since the second quarter of 2005, while hotel rates showed a modest decrease in Q2 of this year against the previous quarter, presenting significant opportunities for procurement and travel professionals to negotiate additional savings, according to North America Business Travel Monitor (BTM) data and analysis from American Express Business Travel.

Signs point to corporations continuing to scale back on business travel spend and frequency. In addition, airlines are switching gears and are competing heavily to gain the business of a smaller pool of business travelers.

Highlights of the Q2 BTM included:


"Despite widespread discounting and trading down in business travel, we are seeing a leveling in pricing and even an uptick in some areas in our Q2 versus Q1 data, as well as, in our monthly BTM data," said Christa Manning, director with eXpert Insights at American Express Business Travel. "With demand still down significantly versus last year, there are many savings opportunities in the market for savvy procurement and travel management professionals. It's a critical time for companies to have an aggressively managed business travel program to help lock in competitive rates and effectively control costs while keeping travelers on the road."

International Airfares: According to the report, several factors led to the decrease in international airfares paid. One key factor: Companies are employing the cost saving measure of requiring travelers to use of coach class seats instead of business class. In the second quarter, 36 percent of booked travel was in business class versus 50 percent in the second quarter of 2008. Also, airlines are making lower cost fares more available as they compete internationally, and the airlines also are deepening corporate discounts on the majority of fare classes in Q2 2009.

Domestic Airfares: Airfares continued to fall due to a drop off in demand as economic conditions remained challenging, as they have since late 2008. The decrease can be attributed to lower fares becoming more available through the airlines, and corporate policies requiring travelers to book further in advance for those lower fares.

"If buyers haven't looked at hotel rates since the end of last year, now is an ideal time to analyze hotel rate potential savings for 2010 corporate programs," Manning said. "There is an opportunity to secure significant discounts based on continued market pressures, but companies will have to negotiate effectively as hotels compete aggressively for the business buyer and resist further rate drops."

Car Rental Rates: In Q2 2009, the overall cost of car rental decreased slightly from Q1, attributable to difficult economic conditions that have led to changes in company and traveler behavior. An overall lower demand and reduced pricing is the net result of these conditions. Also contributing are slightly reduced inventories at the rental car companies and rental firms aggressively negotiating with corporate buyers to lock in more consistent volumes of business.

The American Express Business Travel Monitor can also be accessed through a subscription to eXpert Insights, a dedicated research practice within Global Advisory Services, created with the goal of helping companies cut the costs of business trips by identifying and implementing best practices and creative strategies within their T&E programs.