Manufacturers Alliance/MAPI cites exports a key to future U.S. growth, warns against stepping away from leadership role in FTA negotiations 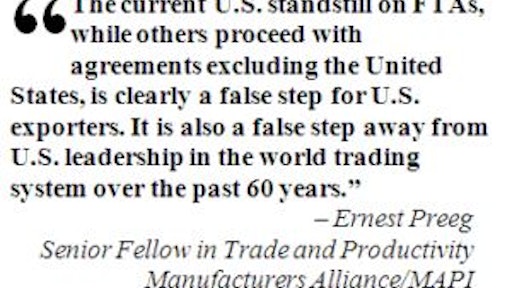 Arlington, VA — September 17, 2009 — Free trade agreements (FTAs) in Asia, particularly by South Korea and India, pose a threat to U.S. manufactured exports that will continue to be subject to relatively high tariffs, according to a new report from Manufacturers Alliance/MAPI.

In the report, "Free Trade Agreements in Asia: U.S. Exports at Risk and Much More," Ernest Preeg, senior fellow in trade and productivity at the Alliance and report author, writes that the July 2009 Korean FTA with the European Union (EU) will give a price advantage to European exports, which are already larger than U.S. exports to South Korea.

In addition, Indian FTAs concluded with South Korea and Singapore, and currently being negotiated with the EU and Japan, pose a similar threat to U.S. exports to the rapidly growing Indian market.

"The short-term challenge," said Thomas J. Duesterberg, MAPI president and CEO, "is that U.S. exports, particularly manufactured goods, are being put at risk in high-growth Asian markets without U.S. participation, as FTA participants gain a duty-free price advantage. As we struggle to find ways to spur growth in the U.S. economy, access to Asian markets is crucial."

To stem the headwinds, Preeg argues for early congressional approval of the pending U.S.-Korea FTA that would "level the playing field" in that market.

"U.S. exporters need all the help they can get to fend off Chinese competitors, and early implementation of the U.S.-Korea FTA would be a significant help," Preeg says. "The current U.S. standstill on FTAs, while others proceed with agreements excluding the United States, is clearly a false step for U.S. exporters. It is also a false step away from U.S. leadership in the world trading system over the past 60 years."

The report recommends a broader FTA strategy beyond approval of the three current pending agreements with South Korea, Colombia and Panama. Preeg advocates pursuing a two-track trade policy. Most pressing, he says, beyond approval of these three pending FTAs, is to establish a bilateral study group for a U.S.-India FTA that would provide the basis for considering an FTA in the new Indian trade policy setting.

"By standing still on trade agreements with Asia," Preeg says, "we are falling behind our competitors in Europe, China, and India."

The multilateral trade objective would be the consolidation of the growing number of FTAs within a "plurilateral" FTA for the non-agricultural sector among all mature and newly industrialized nations, according to the Alliance.

Opponents of FTAs argue that the agreements ultimately lead to greater U.S. job losses than gains, and particularly the loss of high-paying jobs. The think tank Economic Policy Institute, for example, has argued that the North American Free Trade Agreement has displaced more than 1 million U.S. jobs since enactment in 1994, as well as suppressed real wages for U.S. workers.

Opponents also assert that the agreements include what they view as lopsided terms that are less favorable to the U.S. than to the other party or parties to the agreement. In addition, they cite what they believe to be poor enforcement of better labor standards and working conditions baked into the agreements.

Proponents counter that FTAs help increase U.S. exports, and therefore U.S. jobs, by putting in place more favorable terms for U.S. goods to enter foreign markets, and that by encouraging greater trade with developing economies, the agreements can help create better-paying jobs within those economies, ultimately leading to the emergence of middle classes that will desire greater imports of U.S. goods in the long run.