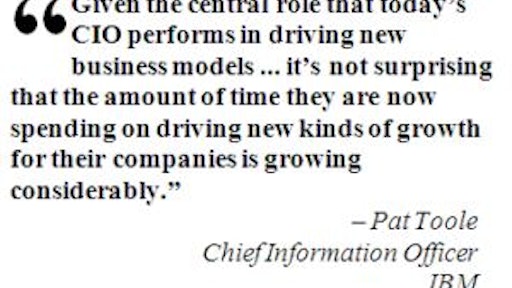 Armonk, NY — September 18, 2009 — Leveraging analytics to gain a competitive advantage and improve business decision-making is now the top priority for CIOs, according to a new study of more than 2,500 chief information officers by IBM.

More than four out of five (83 percent) respondents to a recent survey identified business intelligence and analytics — the ability to see patterns in vast amounts of data and extract actionable insights — as the way they will enhance their organizations' competitiveness, IBM said.

These results and other insights are detailed in the just-released "Global CIO Study 2009," which is the largest face-to-face survey of CIOs ever conducted, according to IBM. The study, titled "The New Voice of the CIO," represents the insights and vision of CIOs from 78 countries, 19 industries, and small, midsize and large organizations.

IBM said that the study reinforces the increasingly strategic role that CIOs are playing as visionary leaders and as drivers of innovation and financial growth. With an increased focus on data analytics, the survey also revealed that data reliability and security have emerged as increasingly urgent concerns, with 71 percent of CIOs planning to make additional investments in risk management and compliance.

"CIOs are investing in business analytics capabilities to help them improve decision-making at all levels," said Pat Toole, CIO of IBM. "In addition, in this challenging economy, CIOs understand that analytics can be key to new growth markets, whether it's new ways to manage a utility grid or smarter healthcare systems. Managing and leveraging new intelligence through analytics is something that today's CIO is pursuing to gain competitive advantage in these new markets."

"This study is a very important piece of work," said Melodie Mayberry-Stewart, CIO and director of the Office for Technology within the office of the New York State CIO/Office for Technology. "The duality of the role of the CIO — to be both a visionary and a pragmatist, value creator and a cost cutter — is an issue I and most of the CIOs I talk to deal with every day."

As the role of the CIO itself transforms so do the types of projects they lead across their enterprises, which will allow CIOs to focus less time and resources on running internal infrastructure, and more time on transformation to help their companies grow revenue, IBM said. CIOs are transforming their infrastructure to focus more on innovation and business value, rather than simply running IT, according to the research.

In the study, CIOs also identified the top visionary projects that they are working on now or foresee implementing in the future, ranging from process improvement to taking advantage of technologies that can provide immediate and long-term financial impact, such as: business intelligence and analytics, virtualization and green IT, service oriented architectures (SOA), service management, and cloud computing. CIOs are also focusing on mobility solutions and unified communications, collaboration and social networking tools, and Web 2.0 projects, to enable more effective communications for employees, customers, and partners.

"Clearly the role of the CIO is changing dramatically," said IBM's Toole. "On the one hand they are trying to standardize routine processes and simplify their existing IT infrastructure to reduce costs, hence their growing interest in technologies such as cloud computing. On the other hand, given the central role that today's CIO performs in driving new business models, whether it's a Smart Grid system, an Intelligent Transport system, or a transparent food supply chain, it's not surprising that the amount of time they are now spending on driving new kinds of growth for their companies is growing considerably."

Other key findings of the survey include:

The CIO study included more than 2,500 face-to-face interviews, conducted over four months from January to April 2009. In addition to the detailed personal feedback, IBM also incorporated financial metrics and statistical analysis into the findings.

The report also highlights a number of recommendations ranging from strategic business actions and use of key technologies that IBM has identified that CIOs can implement, based on CIO feedback from the study.

The full 2009 CIO Study and interviews about the study are available (registration required) at www.ibm.com/ciostudy.