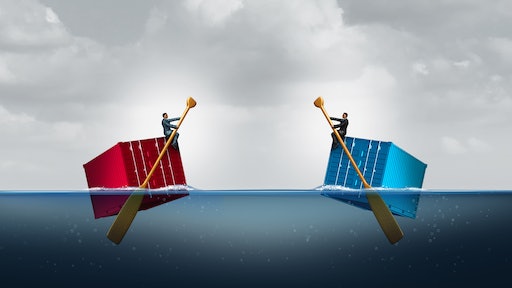 Effective on April 1, 2017, these three large alliances are considered formal carrier alliances, and were a dramatic display of the vast changes being made in the industry, as they now cover 95 percent of global container trade. The alliances are: the 2M Alliance (MSC, Maersk, Hamburg Sud, Hyundai), the Ocean Alliance (CMA CGM, APL, COSCO, China Shipping, OOCL, Evergreen) and The Alliance. (NYK Group, “K” Line, MOL, Yang Ming, Hapag-Lloyd, UASC).

With the changes in carrier ownership over the past year, some of the “carriers” listed as alliance members are now actually a brand of the carrier owner. For example, Maersk is buying Hamburg Sud, Hapag Lloyd bought UASC, CMA CGM owns APL, and COSCO is purchasing OOCL. Japanese carriers will also form a single entity in April 2018. And consequently, the overall pool of competitors keeps decreasing.

This lack of competition has also allowed the carriers to begin to regain profitability and control rate fluctuations and space availability. And as a shipper looking for alternatives, it can be worrisome that five or six international carriers control all major global trade routes.

Why Were These Alliances Necessary?

Why has there been a need for these alliances at all? Over the past 10 years, the industry has seen the persistent challenge of an imbalance of global supply and demand throughout the market, affecting carriers and shippers alike. At times, there is overcapacity in the market, causing the rates to plunge, but there are also instances in which demand picks up quickly. Carriers have benefitted from these periods of increased demand, causing rates to shoot up and become more volatile and challenging for shippers to allocate and purchase space.

One of the driving factors of this global supply and demand imbalance was Maersk's fleet investment initiative: Maersk wanted to control the global container market and drive existing industry rates, and began making more vessel orders and placing shipping orders from more vessels to achieve this. However, this effort was stymied by the Great Recession of 2007-2009, when supply decreased rapidly for container shipping.

The recession caused a chain reaction for carriers, making it necessary to ensure that freight rates didn’t tumble too far. Some of the methods used to accomplish this were:

Since April, there have been notable changes to carrier schedules, loops and direct ports of call versus transshipments—and that has impacted transit time and port options. Some carriers have chosen to stop calling low-volume, unprofitable ports and regions. Those carriers with contracted rates in place notified shippers that they would no longer accept cargo for those destinations. Shippers then had to scramble to find alternate carriers many times the cost of contracted rates.

There is a concerted effort on the part of the carriers to collectively examine how different trade lines should be serviced, how they can provide these services in the most competitive way and how their overall costs can be managed most effectively. In light of the rocky path of continued supply and demand imbalance and challenges with overcapacity, the goal is for ocean carriers to truly get in better financial shape for the future.

The Impact of Carrier Alliances

Overall, the potential strengths that have resulted from the carrier partnerships include:

However, there are also weaknesses in these alliances and some things to be aware of. For example, there are concerns that one or more members of these alliances may be in debt. The impact of any one member’s financial challenges could be passed off to the rest of the alliance—similar to what the industry saw during the recent Hanjin bankruptcy.

Other concerns within the industry include:

It’s critical for shippers to understand which carriers are in which alliances and ensure that they have balanced carrier coverage among the three alliances. For any contracted carrier, shippers should be aware of how much of their freight will actually move via the contract-holding carrier versus an alliance member.

If shippers are booking through 3PLs rather than direct carriers, they need to know which carriers and alliances do those 3PLs work with. For example, can the shipper choose the carrier they want to work with under NVOCC contracts? Knowledge is power, and too many shippers were taken by surprise when Hanjin declared bankruptcy a year ago—despite the warning signs building for months. As for any product purchased, it’s important for shippers to be a smart consumer for their ocean services.

It’s also important to remember that, for the most part, carriers are still not consumer oriented. They can be bureaucratic, inefficient and challenging to partner with when problems arise. And responsiveness may also be difficult with many carriers.

However, there are a number of things that shippers can do to mitigate problems as more ocean carriers are partnering together:

While much is changing, shippers must do their due diligence to ensure they’re receiving the service and cost required for their cargo.

Another Hurdle for The Ocean Alliance

Ocean Trade on Center Stage with Safety of Life at Sea

The Automotive Space is Poised for a Supply Chain Nightmare

Find out who Supply and Demand Chain Executive’s overall winner is for our Women in Supply Chain Award 2022 in this exclusive reveal and interview conducted by managing editor Brielle Jaekel.
Brielle Jaekel
September 13, 2022
Follow Us