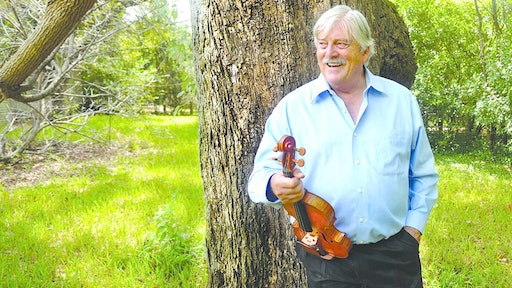 While America’s manufacturing dominance has been diminished by offshoring and the rise of automation, there is an undeniable resurgence and renewed appreciation of American craftspeople, engineers and innovators who are once again elevating the art of making things.

Dr. Charles R. Ervin is an Austin, Texas-based maker and restorer of fine stringed instruments and bows (www.ervinviolins.com). His life’s work focuses largely on the violins and other stringed instruments produced by Italian masters, such as Amati, Guarneri, Ruggieri and, of course, Antonio Stradivari. Through his meticulous research and dedication, Ervin is not only preserving the centuries-old art of violin making, but equally important, raising awareness among contemporary instrument makers, players and others in the music community about the construction, design, science—and most recently, the secret—to crafting modern-day instruments on par with those of the great masters.

His journey started at a young age

“When I was 4-years-old, I saw a picture of a violin and thought it was the most extraordinary, beautiful shape I had seen in my four short years, and I wanted to know why it was so compelling. Then, when I was 7-years old, I read about Stradivari (1644–1737) and that he lived in Cremona, Italy, and was one of the principal makers of this instrument,” says Ervin. “I hoped that there might be something left over that would give me insight into the beauty of the shape. I was determined that, at some point, I would go to Cremona, follow in his footsteps, look in attics and basements, and see what I could find.”

What he found eventually answered the question as to why the instruments produced by makers from the Cremonese School during the 17th and 18th centuries were far superior to any instruments produced previously, and to this day, are regarded as among the most desirable.

Ervin left for Cremona at age 34. He lived there for four years and, during that time, studied at the Cremona School of Violin Making.

“The greatest violin makers were living in Cremona between 1550 and 1750. Their instruments are valued for their beauty in sound, but something happened around 1750 that produced a decline in quality,” explains Ervin. While violin making has remained essentially unchanged over the last 500 years, “knowledge of the violin’s invisible architecture has been lost,” he says.

Ervin’s ongoing quest to unlock the secret of this golden period of instrument making was rewarded with a remarkable clue he uncovered while studying in Cremona, which he finally made public on February 27, 2014, during a lecture at the University of Texas at Austin, in conjunction with the Menuhin Violin Competition (www.vimeo.com/96826212).

It all rests, in succinct terms, with Pythagoras’ theory that primary musical intervals, such as the octave, fifth, fourth, major third and minor third—those most pleasing to the human ear—are expressible in simple mathematical ratios that not only harmonize mathematically, but also musically. And most astonishing, these intervals served as the precise mathematical template upon which Stradivari designed his instruments. Far from a happy accident, Stradivari’s application of Pythagorean principles resulted in instruments still revered for their exceedingly beautiful tone color, and ability to resonate to the very core of players and listeners alike.

During the course of his work, Ervin’s methodical calculations, observations and studies of actual instruments also revealed a deviation in the placement of the F-holes in Stradivarius violins. They were asymmetrical—an intentional design that added to the sound complexity of the instruments.

Ultimately, “[Stradivarius violins] submit to geometric analysis,” emphasizes Ervin. “And dare I say it … to intelligent design.” He adds, “The violin is a very disciplined engineering project whose purpose is great music based on Pythagorean ratios.”

Stradivarius violins and instruments from the great masters are not going to be around forever, Ervin says, “but to keep the art of these instruments alive, you have to know what that art is.”

Indeed, Ervin and others committed to sustaining and advancing their art amid a world driven by mass production, consumption and disposable goods are a treasured American resource bound by this common philosophy and quest.