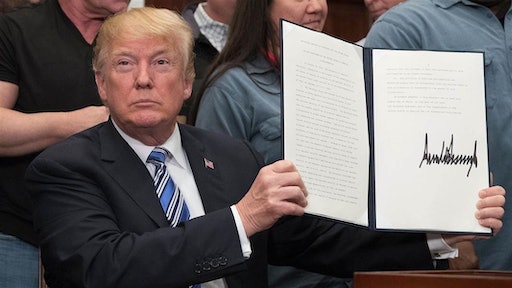 Currently, Canada and Mexico are exempt for the tariffs, but only for the time being. Trump said that Mexico and Canada would be spared from the tariffs as they continue to renegotiate NAFTA with the US. But it's not clear what would happen if those talks fall through. Canada is the largest supplier of both steel and aluminum to the US.

"Mexico reiterates that the negotiation of NAFTA should not be subject to conditions outside the process," the Mexican Economy Ministry said in a statement.

Trump believes that the tariffs are necessary for American security, but others fear that the decision could lead to a trade war.

America's biggest trade partners are blasting the President's decision and have said that they will retaliate if necessary.

The Chinese Commerce Ministry called Trump's tariffs "a serious attack on normal international trade order". The U.S. traded more goods with China than with any other country this past year. Total trade between the countries reached $636 billion last year.

South Korea and Japan have said that Trump's tariff decision is "regrettable" and "unjust." Both countries are leading trade partners with the U.S. and major military allies in Asia. South Korea said that they will use the tariffs as an opportunity to seek new markets for its steel, but will still try to get on the exemption list.