Strategic and Operational Risks in the Auto Industry

A case study focused on Brazil, Argentina and Mexico evaluating some of the integrated data and analytics tools that teams involved in the selection and management of global supply chains can utilise to address some of their key challenges. 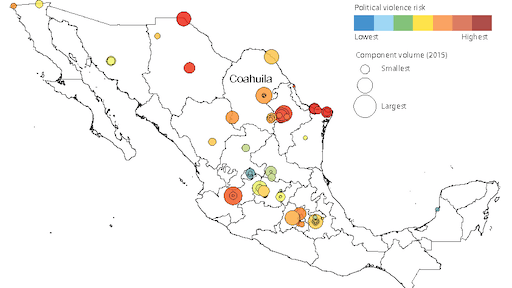 A basic need for global sourcing teams is to identify availability of new suppliers for specific components. Once that identification of potential suppliers is done, the question follows: how competitive can different countries be in supplying components? Matteo Fini, a supplier analytics expert at IHS Automotive suggests a good starting point for any strategic review of global operations or supplier base is the establishment of rigorous metrics that allow the comparison and benchmarking of risks versus costs. One approach is to evaluate component pricing alongside country transportation costs, differentiating between transportation modes.

Where such detailed component price data is unavailable, an approach to measuring component costs is to evaluate manufacturing wages alongside materials inputs costs, and benchmark these relative to the United States. The IHS Auto Raw Material Cost Index tracks a basket of over 25 input materials for vehicle manufacturing and weights the individual material costs based on the composition of a representative vehicle. The index can be used to show costs over time, and also to compare across countries.

Another variable is manufacturing wages—in 2015 Mexico’s are 12 percent of those of the US, in Argentina 47 percent and for Brazil 21 percent. Emily Crowley, an IHS economist, points out though that in Mexico and Brazil, it would take approximately four workers to produce the same amount of output as one U.S. worker, and in Argentina it would take three workers. By adjusting wages for productivity, and then taking a weighted average of these unit labour costs and the raw material costs, we can see the lowest cost option in our sample is by some margin Mexico (cost score of 0.58 relative to U.S. at 1)—factoring in forecasts for these variables would further improve long term planning.

It is also important to evaluate the predictive indicators of a full spectrum of risks—including geopolitical and economic. Some are at country-level but for others it is possible to ascertain risk at specific locations—which is important when evaluating the risk of disruption to supplier prospects due to protests and riots, terrorism, or violent organized crime, which can be highly differentiated within a single city. Here, the specific locations of all individual tier 1 auto suppliers in the three countries were accessed from the IHS Automotive Component Analytics database, risk scored, and aggregated to the country level to give the overall location risk.
Compared with the U.S., all three countries have significantly higher overall risk, but in different ways. In Argentina, for example labor strikes and tax increase are of most concern, whereas in Mexico, terrorism (included in our definition of violent organiezd crime) and corruption are key factors. In Brazil, protests & riots and labor strikes were top risks. Appreciation of these differences can help feed into strategic planning at an early stage—for example if violent organized crime is going to be a key threat, then corporate security needs to be part of the process early on. If labor strikes are going to be an endemic issue then prioritising relationship building with government and unions may be critical.

Combining cost and risk scores into a single index reveals Mexico has the best risk-adjusted sourcing score, with Brazil close to the U.S. benchmark but Argentina, due to relatively high costs and very significant risks is ranked bottom.

Such metrics while useful for benchmarking mask nuances in the risk profiles of each country. Carlos Caicedo, an IHS Country Risk analyst, highlights Argentina’s currency controls, which impair OEM’s ability to source parts and foreign produced inputs. The depletion of foreign reserves and the state interventionist policies of the current government have resulted in the introduction of stringent capital and import controls, which have caused disruption to production lines in most car assembly plants over the last two years. Allocation of dollars for the auto sector is done by the Ministry of Industry quarterly and is reviewed regularly. This means that it could go up or down depending on levels of foreign reserves. Dollars for the sector were cut sharply in the second half of 2014 in the wake of Argentina’s technical default. However, in early July 2015 and after strong lobbying from the sector allocation of dollars for the auto industry went up by 23 percent. This makes the operational environment for carmakers very unpredictable, with significant risk of disruption to production lines if capital flight forces the government to tighten controls on hard currency. Import and currency controls will continue to be managed on a selective basis through 2016.

The key dynamic driving risk in Brazil is increasing unrest by truckers over increases in fuel and toll road tariffs. This and growing difficulties of heavy truck owners to serve debt contracted with banks triggered in February two weeks of road blockades that extended to 12 states. The blockades caused severe disruptions of the country’s largest ports, particularly Santos, which handles most manufactured goods entering or leaving the country, and consequently on road transport—this had a direct impact on autos manufacturing, with production lines disrupted to lack of components. There is risk of fresh protests in the one–year outlook, as the main causes of the unrest persist. The tariffs charged by truckers, which have fallen by more than 25 percent, are unlikely to recover soon. Meanwhile, the government, which is struggling with an unsustainable fiscal deficit of more than 7 percent of GDP, is severely constrained to offer the fuel subsidies that in the recent past managed to defuse conflict with the powerful truckers association.

Such risks highlight the importance for sourcing teams to understand the extent to which their supply chain is exposed to disruption on each transportation node, and to be aware of the risks associated with specific suppliers. Combining data from IHS Automotive and IHS Country Risk allows such granular mapping of the geographical footprint of suppliers, their risk and – moving from the strategic to the tactical/operational levels - daily intelligence on events that may cause disruption. In Mexico, where are suppliers most exposed to violent organised crime and cargo theft from cartel hotspots such as Coahuila, which in 2015 accounted for 75 percent of the country’s 32 million supplied airbag units?

Alastair Hayfield, from IHS Automotive, explains that operational dashboards blending intelligence on disruptive events, with detailed supply chain data, can assist in maintaining business continuity. For example, in July 2014, in Rosario, Argentina, social and political activists blocked the Rosario-Buenos Aires highway to protest against dismissals from an automotive OEM. Does this matter? A dashboard shows only one component supplier potentially affected in Rosario itself, with yearly production of 233,000 seat assemblies and 7,000 seat recliners. GM’s Rosario production plant accounts for 97 percent of this production, with Honda’s Campana plant taking 3 percent. However, the highway is also on the route between Buenos Aires and Cordoba—so if the event continued to disrupt cargo then potentially shipments from the seven suppliers in that city may be disrupted? Factoring in an estimated one day of disruption allows us to see the total component volumes at risk due to the event. Industry exposure may be far wider, with 17 OEM production plants across Argentina, Brazil, Mexico and Venezuela exposed to those suppliers.

Such analytics point to another key question—which suppliers are we overexposed to as an OEM, what proportion of our production is reliant on a supplier? How important a customer are we—what proportion of a supplier’s revenue do we account for compared with our competitors?

While this case study has focused on assessing geopolitical and security disruption, for which location is crucial, there are several other factors to be incorporated in any model—for example, short term financial indicators of suppliers. A more complete solution would also evaluate how competitive a supplier panel is on quality, delivery and costs, and integrate both third party and internal data in a coherent system that connects the dots between strategic planning and operational management. ■