A new generation of robotics and automation is needed not only to address the global skilled labor shortage but to increase flexibility and output as consumers demand more in the age of Amazon. 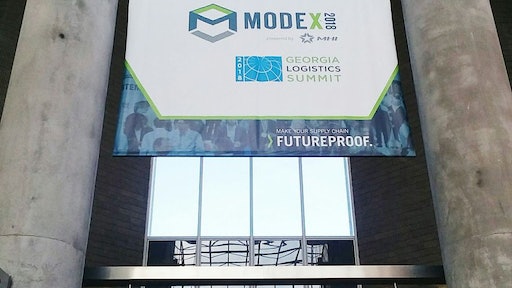 If I learned one thing at MODEX last week it is that warehouses and distribution centers all across North America are hiring. The problem is that 1.) few people are interested and 2.) those who are interested are not always the most qualified.

A keynote address on Day 3 of the conference by Mike Rowe, who is best known for his work on the Discovery Channel series Dirty Jobs, focused on the importance of skilled labor and why and how it is being devalued by the media.

Through a hilarious (yet slightly disturbing) recounting of an early episode of Dirty Jobs, Rowe compared artificial insemination to the global skilled jobs crisis. Forced to pixilate or blur out a bull’s unmentionables, Rowe equates the incident to what he calls a censorship of opportunity.

“As a culture, we have pixelated entire categories of job opportunities,” he said. “There are real dilemmas facing trade workers, miners, farmers and more. We don’t look at trade schools, two-year schools and community colleges the way we look at four-year colleges, so we don’t look at those jobs the same way.”

According to the Department of Labor, 75 percent of the more than 6 million unfilled jobs do not require college. They require training. The opportunities in materials handling and logistics alone add up to tens of thousands of jobs, he said, yet our parents, our guidance counselors, our teachers have laid a path for success that only seems to end in a degree from a four-year university. Rowe reminded attendees the importance of trade schools and the opportunities available for skilled laborers.

“We refuse to look at trade schools on the same level as four-year universities, but that’s where the opportunities are…We need to rethink our relationship with opportunity,” he added.

While Rowe proposes a re-education, which could stem from a government-backed PR campaign or through organizations like MHI and associated industry events, the reality is that companies don’t have years to wait for a cultural shift in the way society views skilled labor.

A recent in article in the New York Times details the severe labor shortage now impacting Eastern Europe, where companies instead are investing in robotics.

Following the fall of Communism, countries such as the Czech Republic, Hungary, Slovakia and Poland became hubs for low-cost manufacturing, averaging a growth of 5 percent in recent years. Both Toyota and Dell call the Czech Republic home, which boasts an unemployment rate of 2.4 percent, the lowest in the European Union. Growth in the region, however, has come to a standstill as nearly a third of its companies have started to turn away orders due to a lack of manpower, according to the Czech Confederation of Industry.

Luckily, Europe was an early adopter of automation, something North America has been slow to embrace. New robot installations in the Czech Republic rose 40 percent between 2010 and 2015, according to the International Federation of Robotics. Today there are around 101 robots for every 10,000 workers—but soon that will not be enough.

A new generation of robotics and automation is needed not only to address the global skilled labor shortage but to increase flexibility and output as consumers demand more in the age of Amazon. Nowhere has that been more apparent than through the innovative showcase MODEX displayed this year.