OceaNS Bridge Express is said to be a first-of-its-kind service. It originate at the Norfolk International Terminal at the Port of Virginia and interchange with Union Pacific in Chicago, with connections to West Coast markets. 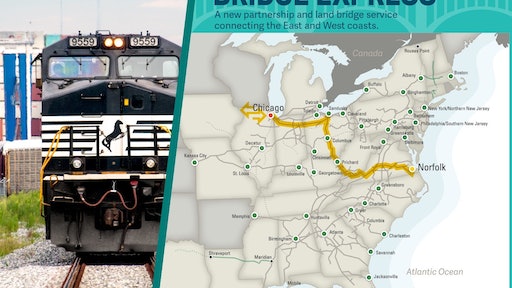 “The current environment has led shippers and carriers to think creatively about moving their goods,” says Shawn Tureman, VP intermodal and automotive marketing for Norfolk Southern. “In response, our team took a customer-centric approach by formulating a partnership with Hapag-Lloyd and Union Pacific, providing a new option for shipping to markets in the Western United States.”

“Union Pacific’s Intermodal network is strategically positioned to provide container shippers an alternative with this overland service to the West Coast,” says Kari Kirchhoefer, VP, premium, marketing and sales for Union Pacific. “Our joint service product to Seattle/Oakland/Los Angeles/Long Beach will expedite these transatlantic shipments to consumer markets in the west.”

A new report from Bloomberg and Truckstop.com reveals brokers plan to capitalize on wider margins and almost 60% are optimistic about gross-margin expansion over the next six months.
Truckstop.com
March 7, 2022

A railroad affiliate of OmniTRAX plans to launch its first electric locomotive, said to cut emissions in half and begin the larger company's foray into electrification.
OmniTRAX
March 3, 2022

The ports of Long Beach and Los Angeles now charge a fee for carriers that stay too long within terminals. The news exhibits the immense pressure the ports are under due to extreme congestion.
Port of Long Beach
October 27, 2021
Follow Us