U.S. Xpress Inc has gone public again after more than a decade. 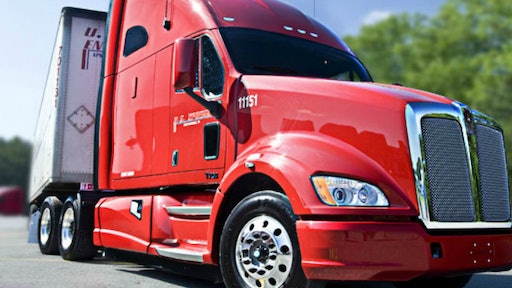 U.S. Xpress (USX) Enterprises Inc has gone public again after more than a decade, the Wall Street Journal reports. It's lower-than-expected offering price suggests that the freight demand could soon run out of steam.

The company has raised $289 million at its initial public offering, according to the Wall Street Journal. USX came up short, selling shares at $16 a piece, its target price range was $18 to $20.

According to the Wall Street Journal U.S. Xpress is one of the largest US carriers, having generated $1.6 billion in revenue in the last year. The company boasts customers such as Walmart, Amazon, FedEx and Procter & Gamble.

Public trucking companies are reporting some of the best results in recent years. According to American Trucking Associations, cargo volumes are rising and truck tonnage up was 9.5 percent in April.

The Wall Street Journal reports that trucking stocks haven't raised as much as freight demand, though. However, U.S. Xpress chief executive Eric Fuller says that he expects the trucking boom to extend beyond the typical eight to 10 quarters.

Since returning to private ownership in 2007, U.S. Xpress has been focusing on improving profitability, replacing top managers and selling off units outside its core truckload business, the Wall Street Journal  reports.