This flexibility is described as critical to growth; still, manufacturers remain optimistic as they make operating model improvements 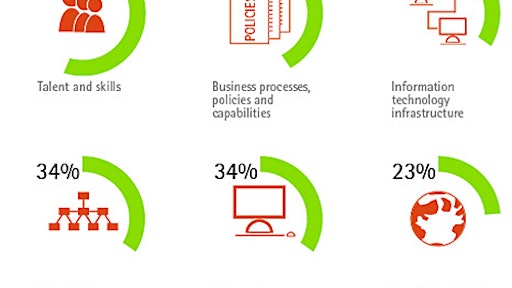 New York—Nov. 22, 2013—The vast majority of global manufacturers lack the ability to swiftly respond to marketplace uncertainty and volatility despite the fact that they believe flexible operations are vital to future growth, according to a new Accenture study. Still, broad optimism about the outlook exists among manufacturers, with 85 percent of respondents expecting growth in the economies of their top markets through 2014 as they commit to improving their operating models.

More specifically, 82 percent of the 250 global manufacturers participating in the study, “Accenture 2013 Global Manufacturing Study: How Leading Manufacturers Thrive in a World of Ongoing Volatility and Uncertainty,” agree that their ability to dynamically move production from one facility to another or to change their product mix at a plant will be critical to growing their business. However, at best only 27 percent believe any component of their operating model was very effective at accommodating a shift in resources and activities to alternate locations. Additionally, only 24 percent of those surveyed thought their company is highly adept at sensing market changes or opportunities before their competitors. Consequently, 72 percent plan to improve their operating model in the next year.

“Manufacturers are finding that their existing operating models are not effective in this new volatile marketplace, but there is clear evidence that they are responding by making a range of investments to create more flexible and consistent operations in the future,” said Russ Rasmus, global managing director of the Accenture manufacturing practice. “Those investments are being made across operating model components, ranging from talent, business processes, policies and capabilities to the information technology infrastructure, organizational structure and production facility networks to drive flexibility into their operations.”

“By improving the reliability of existing assets, manufacturers have an opportunity to boost capacity without buying equipment or building facilities,” said Rasmus. “With this approach, they can also scale up and down with greater efficiency as business requirements change, while also optimizing their productivity.”

Manufacturers also are investing in and integrating digital capabilities into their operations, with 77 percent planning to invest in information technology (IT). Topping their list of IT priorities is performance management (53 percent)—the development of dashboards and metrics that can help management monitor performance, and provide early warning of changes in the business and operations environment.

“Manufacturers are making information technology investments a higher priority as they focus on automation and driving a digital strategy across their enterprises,” said Rasmus. “In tandem, manufacturers must put in place the right talent and skills as part of the effort to maximize the return on these investments.”

Also a reflection of the respondents’ optimistic outlook, 66 percent of the manufacturers reported that they plan to expand their workforces, while 76 percent increased their workforce in the last two years. Expect hiring in the manufacturing sector to continue to be strongest in Brazil among global companies represented in the study.

Skills gaps are most prominent among the skilled trades labor workforce in which 38 percent of the manufacturers reported a significant gap. Thirty-five percent said the same about their general labor workforce. To close these gaps, manufacturers most frequently said they tie performance rewards to an individual’s success and enterprise profitability (46 percent), and offer competitive salaries and benefits (45 percent).

As they focus on their operating model, manufacturers are also modifying their plant network and placing the greatest emphasis on new market entry, according to the Accenture report. Since 2011, 42 percent of the manufacturers relocated operations, with China and Brazil being the top beneficiaries of those moves, and 49 percent established new manufacturing sites, with China, Brazil and the United States being the most common locations, according to the study.

Additionally, 76 percent of the manufacturers expect to make greater use of contract manufacturing through 2014, which can help them create greater flexibility in their operations, and avoid costs associated with building or buying new facilities, equipment or hiring personnel. More than half (54 percent) plan to do this to relieve short-term capacity constraints, while the balance of the respondents (46 percent) are increasing its use as part of a long-term strategy. The increased use of contract manufacturing is to be most prevalent in Brazil (97 percent), and least in France (67 percent) and the United States (66 percent).

While companies and countries alike have taken several steps to shore up their supply chains over the past two years, more can and should be done to better address risk and uncertainty.
Univar Solutions
January 1, 2023
Follow Us