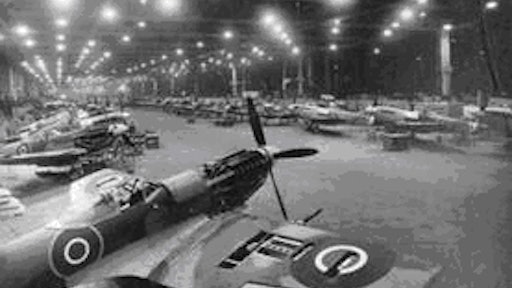 Conventional wisdom is that the concept of a demand-driven supply chain is relatively modern. The article " Winston Churchill's Supply Chain (Part 1)" looked at how in May 1940 the concepts of supply chain agility, just-in-time manufacturing and zero inventories were introduced to offset a pending disaster. And it was done within an incredibly short time frame to respond to the demands of a nation in crisis. This second lesson-from-history article looks in more detail at how this was done and the key leaders involved, namely Lord Beaverbrook.

Today's organizations are striving to move to a more effective demand-driven supply chain. Not only must it be more resilient and cost-effective but also be able to respond directly to continually shifting customer needs and reduce lead times. Computer giant HP took steps toward this by moving from a vertical manufacturing model to an outsourced manufacturing model. This created the world's largest IT Supply Chain that in 2005 consisted of 32 manufacturing plants, 88 distribution hubs, 700 suppliers and 19 logistic partners. That year, HP shipped over 50 million printers, 30 million PCs, 30 million servers and 300 million cartridges.

In May 1940, as the British army was evacuated from Dunkirk, France, Prime Minister Winston Churchill was faced with a disaster and asked his Chiefs of Staff to report on the problem of the defense of the U.K. The report stressed the overwhelming superiority of the enemy on land and in the air. The U.K. was forced into a defensive strategy until the deficits in man power and equipment could be made up. This would mean a relatively long wait of two or three years.

Changes in the Governance Framework

One of the earliest and most important decisions by Churchill in the running of war production was the formation of a new Ministry — the Ministry of Aircraft Production. Churchill believed the Air Ministry had failed to meet its fighter production targets and had to be replaced. The dramatic move was in itself an indication of the commitment now set to fighter aircraft and the urgency that was now attached to it.

Churchill needed a strong leader that could turn around fighter production. Churchill appointed Canadian Lord Beaverbrook as its minister, a close confident he had known since they both served in the First World War cabinet of Lloyd George. Churchill could trust him and gave him a clear mandate to transform fighter production. Beaverbrook, a newspaper magnate, was a no-nonsense man who could cut through the red tape of government bureaucracy. He was an outsider who would take a very different approach to accelerate production, lock-stepping the supply chain to the daily demands of the Royal Air Force (RAF) Fighter Command.

Beaverbrook thought that the Air Ministry was not well suited to running aircraft production, and that people he described as "air marshals" were not appropriate by character or training. He envisioned making his ministry into a fast-growing enterprise run by business people who knew what they were doing. They had the business background and administrative approach that was more spontaneous and informal than the established practices of government departments. The latter was grounded in red tape, routine and paper work, or, as Beaverbrook put it, "organization was the enemy of improvisation." Beaverbrook reasoned that even if this existed at the lower levels of the Ministry pyramid, the top levels would be run by an informal group of his personal advisers drawn from business and industry, with Mr. Hennessy of Ford Motor Co. at its head. This reflected how best practices were brought in from the automobile manufacturing industry to speed up fighter production. In a short time the ministry closely reflected the personality of Beaverbrook and the critical urgency of the tasks he had to face.

Beaverbrook was aware that the average life of a fighter in war was two months, and with a fighter force of 34 squadrons, industry would need to produce 350 new aircraft a month just to maintain front-line strength. Although battle losses could be replaced from manufacturing, reserves or repair, Beaverbrook recognized that even with major increases in production likely losses would out strip these. As a result, Beaverbrook had to approach the problem with out-of-the-box thinking, and he instituted or supported the following initiatives:

"The work you do this week fortifies and strengthens the front of battle next week…The production you pour out of your factories this week will be hurled into desperate struggle next week." Lord Beaverbrook, summer of 1940.

In summary, nothing stood in the way of Beaverbrook's reorganization, and specifically financial considerations were not allowed to impede the program. The functions of the Ministry of Aircraft Production expanded to embrace such diverse tasks as labor, construction, regional services and aircraft distribution to sector airfields. This also included the defense of factories with anti-aircraft batteries. In addition, Beaverbrook was in close contact with Bentley Prior Fighter Command (Air Marshall Sir Hugh Dowding), and Storey's Gate, Churchill's Headquarters.

In July 1940, as a result of Beaverbrook's initiatives, the Ministry increased production by 250 percent in what was once a faltering industry. Beaverbrook had the aircraft factories churning out some 496 Spitfires and Hurricanes per month (see Figure 3) which was considerably more than the German production at the time. By the end of August, despite attacks on British aircraft facilities, fighter production continued to hit an astounding figure 476 per month. By the end of 1940, British factories produced 4,283 fighters, compared to Germany's 3,000. In fact so many aircraft were being produced that the U.K. could boast there were more fighter aircraft than pilots to fly them. The CRO had played a significant role in this and by the end of 1940 it had repaired 4,955 airframes, about 33 percent of the total airframe output going to the RAF.

In this period the other Government production departments had escaped the major overhauls through which the Ministry of Aircraft Production had gone. They all faced change, but it came in smaller and more agreeable doses and thus evaded serious internal unsettlement. They had to undertake the duties of industrial administration new to government officials and tackle emergencies at a quickened pace of improvisation, as well as to recruit from the business world.

Beaverbrook's approach to the supply chain was badly needed in the summer of 1940, but it distorted the supply system of the war economy. After the battle it was replaced by a quota system, where each ministry was allocated a quota of raw materials imports based on their priority in the war effort. By the winter of 1940-41 the urgency was truly over, and in the summer of 1941, when Beaverbrook was transferred to the Ministry of Supply, the Ministry of Aircraft Production was brought into line again with the methods of the other ministries.

The Battle of Britain not only tested the pilots, their planes and tactics but most importantly it was also an attritional struggle that tested the supply chains of the air forces and the production, storage, repair and salvage of fighters.

In today's world, what can we take away from this lesson-from-history? Beaverbrook, an outsider, took a very different approach to the supply chain and introduced the basic concepts of agility. He mandated zero inventories to maximize the output and stuck to his principles, exceeding all expectations. Beaverbrook's supply chain was a significant factor in the story of the conflict.