Shift in U.S., Chinese Market Shares in Asia Could Have Adverse Consequences 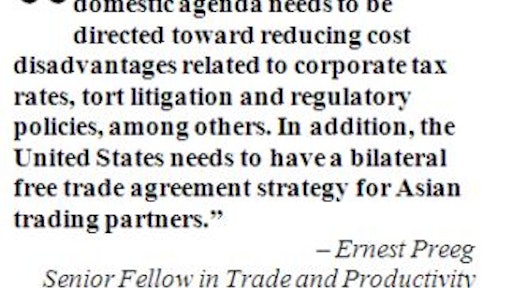 Arlington, VA — March 30, 2009 — The most dramatic development in world trade in recent decades has been the rapid rise of China in surpassing the United States as the leading exporter of manufactured goods, especially in Asian markets. This radical shift of market shares in Asian markets has important consequences for U.S. commercial and geopolitical interests, according to a new Manufacturers Alliance/MAPI report.

Ernest Preeg, senior fellow in trade and productivity and author of the report, "China Displaces the United States as Dominant Exporter of Manufactures in Asian Markets: What Happens Next?", argues that in geopolitical terms the rise of China as an economic hegemon in Asia, together with a declining U.S. trade position, increases Chinese political influence in the region, which is a growing concern among Asian nations as well as for U.S. foreign policy interests.

Preeg highlights the alarming reversal of export leadership between the United States and China from 2000 to 2008 to principal Asian trading partners — Japan, South Korea, Taiwan, Australia and India — and five members of the Association of Southeast Asian Nations (ASEAN — Indonesia, Malaysia, the Philippines, Thailand and Vietnam). U.S. exports to the aggregate markets grew from $133.9 billion in 2000 to $159.4 billion in 2008, or by 19 percent. Chinese exports, however, soared from $71.3 billion in 2000 to $356.1 billion during this time frame, or by 399 percent. In relative terms, U.S. exports were 88 percent higher than Chinese exports in 2000, while Chinese exports more than doubled U.S. exports in 2008.

Preeg concludes that there is no simple solution to this sustained loss of market share by the U.S., and he advocates a comprehensive strategy integrating domestic and international policy objectives.

"The U.S. policy response for the domestic agenda needs to be directed toward reducing cost disadvantages related to corporate tax rates, tort litigation and regulatory policies, among others," he said. Internationally, Preeg added, currency misalignment, especially in China, has been a principal cause of the huge trade deficits in price-sensitive manufacturing sectors of the United States and Europe with Asia.

"In addition, the United States needs to have a bilateral free trade agreement (FTA) strategy for Asian trading partners, beginning with the approval of the U.S.-South Korea agreement, in order to head off the adverse impact on U.S. exports from the proliferation of FTAs among Asian nations, excluding the United States," Preeg concluded.