How to Keep Occupational Diseases from Affecting Your Workers' Compensation Costs

Know your work environment, know the dangers — and know who you are hiring, advises the Institute of WorkComp Professionals' Teresa Long 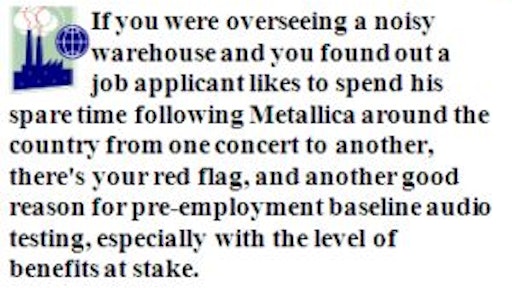 June 3, 2009 — A recent report by the American Association of Family Practitioners notes that occupational diseases account for 860,000 illnesses and more than 60,000 deaths each year. And this runs the gamut of causes, everything from coal miners contracting black lung disease to assembly line workers in meat packing plants developing carpal tunnel syndrome.

It would be hard not to realize both conditions are on the opposite spectrum of severity. But what they do have in common that they cost employers a bundle in Workers' Compensation benefits, loss of production and a paperwork nightmare for everyone involved.

For all the ways occupational disease affects the Workers' Compensation system, there are those who don't fully understand what it is, how it differs from a standard claim or how it affects an employer.

An occupational disease is identified as any chronic ailment that occurs as a result of work or occupational activity, as long as the ailment is more prevalent in a given body of workers than in the general population, is not considered an "ordinary disease of life," was contracted during employment and results from exposure that is common to that occupation. The most common are repetitive trauma (common among assembly line workers doing repetitive tasks), skin disorders (notable among farmers and those in the agriculture industry), toxic effects of chemicals (working around asbestos), and respiratory disorders (such as black lung disease).

Claims for occupational diseases differ from standard Workers' Comp accident claims in many ways. For one, they take longer to be reported by the worker, sometimes twice as long. Unlike throwing out your back picking up a crate on a warehouse floor, or hitting your head on a low-hanging pipe, the condition tends to build slowly over an extended period of time. And before workers even connect it back to their job, they are already entrenched with the family practitioner, who probably is not versed in occupational medicine Paperwork has started, insurance has kicked in, and the ailing worker is committed to treatment by their family doctor and not open to one recommended by the employer.

Employers must also be aware of the "last injurious exposure" rule, which means that if the employer was the last company an employee worked for and was "exposed" to a hazard, that company can be held 100 percent responsible for the claim. It doesn't matter that an individual worked for 10 years unloading cargo for an airline. If he leaves there and works for another airline — even for one day — and puts in a successful hearing loss claim, the financial burden can fall on the current employer.

So how do employers protect themselves, short of eliminating the hazard totally? Very simple: Know who you are hiring and what they may have been exposed to. Do the due diligence beforehand, especially if you are aware you have a potential hazard greater than what the general public is exposed to.


Perhaps the best preventive medicine, and the way to avoid falling into the "last injurious exposure" black hole, is simply to know who you are hiring. What type of job did they hold before? How detailed is your employment application when it comes to listing prior employment? Are gaps in time between jobs discussed? Could they have been exposed to any disorder that may also exist at your company? All the more reason to implement pre-employment baseline testing, which then becomes the benchmark should any future claim arise. It doesn't necessarily mean the employer can deny total benefits if there's a claim, but it may minimize the costs by establishing a "true" level of loss, from baseline to the claim level.

The pre-hiring phase and good claim investigation by the insurance company adjustor might also involve understanding what the employee does in his or her spare time, and how that will affect a future claim? If you were overseeing a noisy warehouse and you found out a job applicant likes to spend his spare time following Metallica around the country from one concert to another, there's your red flag, and another good reason for pre-employment baseline audio testing, especially with the level of benefits at stake. The tests are readily available at most medical facilities and are relatively inexpensive.

In the end, it's really all about the employer knowing the work environment, the potential risks that environment holds, finding ways to minimize the risk, and making sure procedures are in place to hire the right people.