Companies will continue to spend on components and services in remainder of 2009, despite underestimating negative impact of recession, GlobalSpec Industrial Indicator Survey reveals 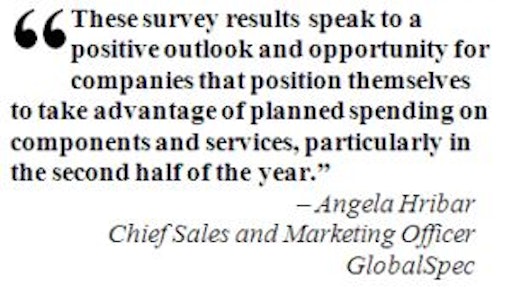 Troy, NY — October 19, 2009 — The vast majority of organizations within the U.S. industrial sector (73 percent) have reduced spending in response to revenue shortfalls caused by the economic recession, according to a recent survey of engineering, manufacturing, technical and industrial professionals.

Yet optimism remains for a turnaround as 61 percent of those surveyed plan to spend the same or more in the second half of 2009, indicating that better times are ahead, according to GlobalSpec, reporting on its eighth annual Industrial Indicator Survey.

GlobalSpec is a search engine for the engineering, industrial and technical communities, allowing users to search by specification among more than 186 million parts in 2.3 million product families from more than 23,000 supplier catalogs.

Despite — or perhaps because of — difficult economic conditions, companies are seeking out growth opportunities. Survey results show that expanding into new markets, improving production efficiencies and new product development have replaced the costs of raw materials, energy and transportation as top concerns for the industrial sector.

In all, 54 percent of respondents stated their company is focused on expanding sales into new markets, while 46 percent are focused on new product development.

"These survey results speak to a positive outlook and opportunity for companies that position themselves to take advantage of planned spending on components and services, particularly in the second half of the year," said Angela Hribar, GlobalSpec's chief sales and marketing officer.

Additional findings from the survey are available at www.globalspec.com/wp/2009_Industrial_Indicator_GlobalSpec.