Aboveground drivers, not the amount of belowground resources will be crucial factor to flow of supply in the coming decades, IHS CERA asserts in new report 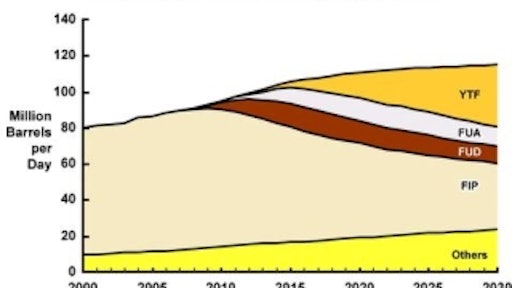 Cambridge, MA — November 30, 2009 — Global oil productive capacity will grow though 2030 with no evidence of a peak of supply before that time, according to a new report by IHS Cambridge Energy Research Associates based on analysis of more than 10,000 projects around the globe.

The report, "The Future of Global Oil Supply: Understanding the Building Blocks," extends IHS CERA's global oil outlook through 2030 and expects global oil productive capacity to grow to as much as 115 million barrels per day (mbd) through that period from the current level of 92 mbd — a 25 percent increase.

Post-2030 supply could struggle to meet demand but this would take the form of a decades-long "undulating plateau" rather than a sharp fall, the report says. The complete report is available for download at the IHS CERA Web site, www.cera.com.

"There is more than an adequate inventory of physical resources available to increase supply to meet anticipated levels of demand through 2030," said Peter Jackson, a senior director with IHS CERA and author of the report. "It would be easy to interpret the market and oil price trends from 2003 through 2009 in isolation to support the belief that a peak in global supply has passed or is imminent. But this only illustrates that the market continues to act as the shock absorber of major volatility."

Sixty percent of the more than 1,000 fields examined in detail for the study were found to have production levels that were either steady or climbing. When taking into account the production of these fields the global aggregate decline rate of all fields currently in production is estimated to be 4.5 percent, the study finds.

"Supply evolution through 2030 is not a question of resource availability," Jackson added. "The crucial issue lies not belowground. It is the aboveground factors that will dictate the ultimate shape of the supply curve."

Key aboveground factors such as global economic growth, the capability of the upstream oil industry, costs, government policies on access to reserves and taxation, the evolution of renewable alternative energy sources and the effect of climate change issues on policy concerning the use of fossil fuels will have a major impact on the shape of supply, the report finds.

"A radically different oil markets landscape has evolved in the past year," said Jackson. "A drop in demand caused by the economic recession has provided a supply cushion that has moved supply concerns to the backburner for the next few years."

While the economic recession has also driven a reduction in exploration and production investment, exploration and field upgrades have tended to replace global production of 30 billion new barrels (bnb) per annum in recent years. This does not include the revisions and extensions that are such an important part of reserves growth.

Despite recessionary pressures, the first three quarters of 2009 have produced discoveries with collective reserves more than 8 bnb. Multi-billion barrel discoveries, such as those of the Subsalt Brazil, as well as those in Offshore West Africa and Offshore East Africa, continue to emerge. And new giant discoveries in Iraq also create the potential for that country to double its capacity by 2020, the report finds.

The peaking of global oil demand — rather than scale and deliverability of below ground resources — could have a major impact on the flow of supply, the report finds. IHS CERA's analysis finds that oil demand has already peaked in developed countries. (See related article here.)

"So much will happen between now and 2030 to affect demand — from changes in the automobile engine and the electric battery to changes in demographics and values," said Jackson. "Peak demand may ultimately prove to be the main driver of long-term supply."