Freight Costs for Canadian Shippers Fell 9.6 percent in 2009, But Appear to be Stabilizing

Canadian General Freight Index suggests that volatility in freight costs for Canadian shippers is subsiding, point to recovery in economy 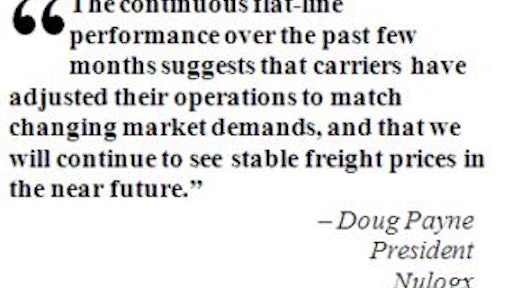 Toronto — February 26, 2010 — Results published today by the Canadian General Freight Index (CGFI) indicate that although the cost of ground transportation for Canadian shippers declined by 9.6 percent since December 2008, freight costs appear to be stabilizing as we move forward into 2010.

"During the first eight months of 2009 there was significant volatility in freight costs, however it appears that the index has begun to stabilize," said Alan Saipe, president of Supply Chain Surveys Inc. "While there are slight pressures in base rates, these are being offset by modest increases fuel surcharges."

In December 2009, overall freight costs rose by 0.2 percent when compared to November. base rates, which exclude the impact of fuel surcharges assessed by carriers, fell 0.1 percent. This small reduction was offset by a 3.7 percent increase in average fuel surcharges when compared to the prior month. December's stabilization has been consistent since September 2009, with freight costs having varied by only 0.4 percent in total.

"This data correlates well with the prevailing opinion that our economy is slowly starting to recover from the recession that started more than 18 months ago," said Doug Payne, president for transportation management solutions provider Nulogx, which sponsors the CGFI. "The continuous flat-line performance over the past few months suggests that carriers have adjusted their operations to match changing market demands, and that we will continue to see stable freight prices in the near future."

The CGFI is used by shippers and carriers to benchmark performance, develop business plans and secure competitive agreements. It was developed with the assistance of Saipe. The most recent results are available at the CGFI Web site at www.cgfi.ca.

Alan Saipe blogs on the CGFI and freight trends at http://cgfreightindex.wordpress.com/.