Implementing new technology was 40 percent more likely to be named the largest IT challenge than the next factor. 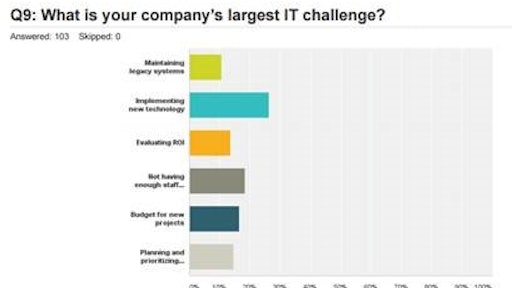 It’s vitally important for technology vendors to be tuned into how their customers feel about their markets and business prospects. This knowledge not only enables them to provide better service, but it should also dictate the kinds of solutions they create.

VAI recently surveyed more than 100 business leaders and IT professionals to collect and analyze their industry-wide priorities and expectations. We asked questions pertaining to business outlook, marketplace growth, overall revenue and size, and expected obstacles for the next year. Overall, the outcomes are very positive, with only 3 percent of survey respondents pessimistic about their businesses’ outlook—this trend demonstrates that, despite some minimal national economic concern, business owners are feeling confident about the near future.

The remaining takeaways can be grouped into three categories: projected IT growth, analytics adoption and application confidence.

Implementing new technology solutions was 40 percent more likely to be named the largest IT challenge for the year than the next leading factor. However, the majority of respondents believe that technology plays a critical role in company growth and success, with 91 percent of companies expecting the same or higher amount of IT spend in 2017.

If our customer survey was given in May of 2008, we would expect that streamlining costs would likely be the biggest driver of technology investments, as bad economic times and compliance was a higher priority over increased productivity a decade ago. In 2017, business leaders’ desire increased productivity to promote company-wide growth. For example, security was always a priority because it’s necessary for survival and overall compliance; however, it doesn’t appear as a primary driver of technology investment because it’s seen as loss prevention, not a profit center, which causes some companies to focus on other technologies.

Nearly 50 percent of companies expect that analytics and business operations may have the largest impacts on their company in the coming year. It’s not too hard to explain the increased desire for effective analytics programs: Looking at our survey respondents, 27 percent are CTOs and CIOs, so tying analytics to a direct return on investment (ROI) for an IT person is easier than something like security or disaster recovery, which is more of a long-term investment. They can see the quantitative ROI value in analytics.

More than 57 percent of respondents list increased productivity as their biggest drivers of technology investment, which correlates to analytics programs and the aggregation of data to figure out how an organization can leverage information to operate more efficiently and effectively.

Despite the fact that more companies are focusing on analytics over cloud migration and other technologies, across the board, the results are fairly similar, which demonstrates that IT professionals really do see the value in all of these options, even if they rank them a bit differently .

In 2010, we started telling customers to try dipping their toes into the cloud by moving parts of their workloads over to get acquainted with it, so today we are pleasantly surprised to see that 80 percent of survey respondents are already using the cloud in some way, shape or form. This demonstrates that the cloud is no longer a novelty and that, as companies begin to understand the ROI behind the cloud, the technology is gaining critical mass adoption.

With many organizations relying on analytics and Big Data, enterprise applications are becoming increasingly popular as they support company operations as a whole. Our customer survey data reveals that 30 percent of respondents believe that warehouse management enterprise applications would most benefit their companies, followed by suggested purchasing and business-to-business/consumer (B2B/B2C) e-commerce applications.

As many business leaders desire increased skillsets in these areas, applications would educate users about problems that are generally too large and complex for one person to manage.

In terms of mobile applications, most respondents report that mobile ordering is of most interest to their companies, followed by mobile warehouse management and mobile proof-of-delivery applications.

More enterprises are expanding the use of mobile apps for their employees, partners and customers. This is partly due to the rise of the smart phone, and because mobile applications solve many of the daily needs of business employees, partners and customers. According to a 2015 Gartner report, “By the end of 2017, market demand for mobile app development services will grow at least five times faster than internal IT organizations' capacity to deliver them.” Mobile apps are increasing enterprise productivity and competition.

Overall, our 2017 customer survey results reveal a positive outlook for the year. With companies preparing to adopt enterprise and mobile applications to increase overall productivity, we can expect enterprises to focus their IT spend on implementing new technologies, and expanding existing analytics programs and migration to the cloud.