A new "Intelligent Guided Vehicle," an autonomous counterbalanced forklift from AGILOX, is guided by swarm intelligence. 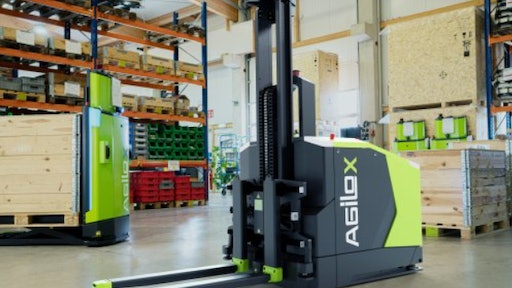 AGILOX is expanding their line of intelligent guided vehicles by introducing a new autonomous omnidirectional counterbalanced forklift, operating with swarm intelligence. In doing so, AGILOX has entered a new area of ​​application: classic intralogistics in inbound/outbound warehousing and storage.

With the ONE, AGILOX's ultralight, high-efficiency forklift product line, the company has reshaped the concept of AGVs. The fleets operate without a central control system, meaning the vehicles navigate the production facility or warehouse in a truly autonomous fashion. The exceptionally compact AGILOX IGVs organize their routes according to the decentralized principles of swarm intelligence, making them much more flexible than traditional AGVs. Additionally, programming or “teaching” the vehicles becomes significantly easier, while central software programs including maintenance, updates, etc. are rendered obsolete—an innovation that lowers operating costs.

AGILOX is now expanding its range of IGVs to include the OCF—an abbreviation for “Omnidirectional Counterbalanced Forklift." While the ONE is equipped with a scissor lift to function as a load handling device (and thus transports the load within the vehicle contour), the OCF is designed according to the principles of the counterbalanced forklift. Hence, it can pick up pallets, lattice boxes, and other load carriers with a maximum weight of 1500 kg (3300 lbs), transport them to the destination, and set them down at a height of up to 1600 mm (63 in).

AGILOX’s intelligent and cost-saving IGV concept opens up new application areas. While the ONE vehicles are mainly used for material supply in production, the OCF enables classic intralogistics tasks in incoming and outgoing goods, order picking and storage, as well as in production—provided that the transport is pallet-bound.

Just like the ONE, the OCF uses an omnidirectional drive concept. It can therefore also drive sideways through narrow aisles, turn on the spot, and maneuver in the tightest of spaces. The same lithium-ion (LiFePO4) battery technology ensures short charging and long operating times - just three minutes of charging allows for up to one hour of operating time.

The IGV fleets can be connected to customer software systems (LVR, ERP, WMS, MES, etc.) via an open API interface. An optional IO box enables the integration of external infrastructure, such as rolling gates and stationary conveyor systems, in the intelligent control system. An analytics module provides the user with all relevant operating data and KPIs.

Dipl.-Ing. (FH) Franz Humer co-founder and CEO of AGILOX, notes “The OCF is a logical addition to round out our product portfolio. With it, we open up opportunities in storage and order picking technology, and thus, a large market in which the IGVs can showcase their advantages over both AGVs and man-operated forklifts.”

The combined operation of the ONE and OCF in a “swarm” also provides a great advantage. For instance, while the smaller vehicles carry out delivery services to assembly workstations or tend to e-Kanban shelves, the OCF can, using the same control system and WiFi infrastructure, take over pallet transport.

The OCF pilot series has already been successfully tested in Vorchdorf, Austria. Series production will begin shortly, with the first OCFs set to be delivered to customers in the first quarter of 2021.