Dhivya Suryadevara was announced to be GM's first female CFO. 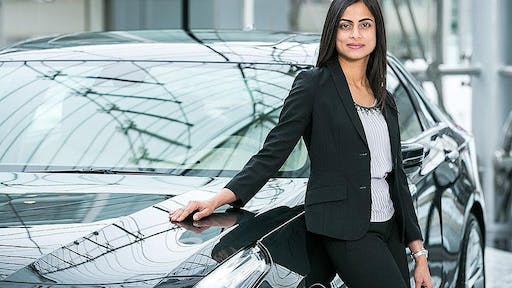 Since starting 14 years ago, Suryadevara has quickly climbed GM's ladder, and serving as the company's CFO is significant because she is the first female CFO in the automaker's 110-year history. GM is now one of only two Fortune 500 companies that have both a female CEO and CFO, CNBC reports.

GM CEO has been making efforts to add more women into leadership roles within the company, CNBC reports.

According to CNBC, Suryadevara originally didn't plan on entering the automotive industry, rather she always enjoying anything "challenging and complicated."

Suryadevara had high expectations from her mother, a single parent who didn't cut corners when it came to education and resources. Suryadevara earned her bachelor's and master's degree in commerce at the University of Madras, and came to the US when she was 22 to attend Harvard Business School where she obtained her MBA.

Experience culture shock and having to grapple with student loans added pressure to Suryadevara. Yet the effort  paid off when she landed an internship at the World Bank before joining UBS as an investment banker, CNBC reports. Eventually she moved on to GM.

"It struck me right away that there was no shortage of interesting things to do there," Suryadevara tells Real Simple. "I saw that I was only limited by how much effort and time I wanted to put in, which is what made me want to work harder."

She went on to serve as CEO and chief investment officer of GM Asset Management in 2013. While running GM's $85 billion pension operations, Suryadevara then took on the role of vice president of finance and treasurer in 2015, CNBC reports. That same year she was featured in Fortune magazine's 40 under 40 list.

After two years of serving as the role of vice president of finance and treasurer, Suryadevara then moved on to become the vice president of corporate finance. There she played an integral role in the Cruise acquisition and Lyft investment, CNBC reports.

Suryadevara's historical role as CFO comes as the number of female CEOs declines. According to CNBC, this year's Fortune 500 list revealed a 25 percent decrease in female CEOs. However, the share of female CFOs is on the rise. Currently, there are 64 in the Fortune 500, nearly double the amount a decade ago, according to Fortune.

Suryadevara is moving up the leadership ladder as the number of female CEOs is declining. This year's Fortune 500 list revealed a 25 percent decrease in female CEOs to just 24, after the departures of several women, including Campbell Soup Co.'s Denise Morrison and Avon's Sheri McCoy.

At the same time, the share of female CFOs is increasing: There are now 64 in the Fortune 500, nearly double the amount a decade ago, according to Fortune.

Anna Beninger, senior director of research at Catalyst, a non-profit that tracks women in leaderships positions, told Bloomberg every step in the right direction is noteworthy.

"Any time a woman is added to the C-Suite it's something that should be celebrated," she told Bloomberg. "Given that the rate of change for women into the C-suite and into the CEO level has been so slow, any time we see one, it is certainly progress."