How Robot Operations Will Fix the Broken Supply Chain 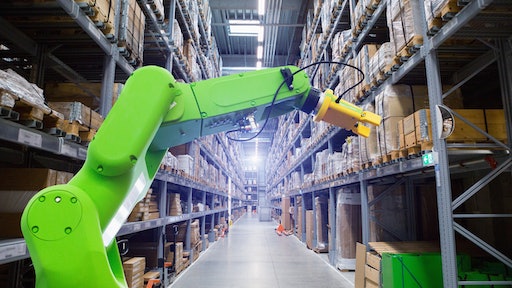 2021 was the year in which global supply chains broke. While the term “supply chain” has historically been of great interest, last year the term gained a darker tone as blaming supply chains for all sorts of product shortages became part of the public zeitgeist.

Going back a few decades, globalization made it possible to decentralize the manufacture of products, from everyday necessities to big ticket items, to countries around the world. With container ships cruising the oceans in a non-climate-friendly fashion, the OECD estimates that ocean shipping carries around 90% of traded goods.

But, this system proved to be inflexible in the face of dual pressures -- labor shortages related (more or less directly) to the Coronavirus disease (COVID-19) pandemic and increases in consumer demand, primarily through e-commerce. This resulted in whole fleets of container ships waiting to be unloaded at coastal ports and occasional empty shelves.

Beyond that, the numbers tell their own story -- more than 11 million jobs in the United States are going unfilled, including many at distribution centers and warehouses that have for so long relied on virtually unlimited access to cheap labor. In the short term, the response has been to make the jobs more enticing.

Automation and other material handling machinery have been a key part of warehouses for decades, with large conveyor belt systems and human-operated forklifts being a common sight in most warehouses. But, now a much deeper change is occurring that will grow exponentially over the next 3-5 years -- switching from the current combination of fixed/inflexible automation plus humans to fill in the gaps to a new model where smart, autonomous robots can tackle different specialized tasks, leaving people to handle the most advanced and exception-prone parts of the process.

This emerging model is made possible by a new generation of robots that have only a passing resemblance to traditional, fixed-function robots typically associated with automakers. In fact, this change has been under way for some time -- according to the Association for Advancing Automation, 2019 was the first year that orders of robots from non-automotive sectors surpassed automotive robot orders.

Relying on powerful processors, a plethora of sensors and artificial intelligence (AI), these robots are significantly more flexible and smarter than previous generations. Smarter robots, including autonomous mobile robots (AMRs), collaborative robots (cobots), drones (for indoor or outdoor use), quadrupeds and industrial robots (often paired with computer vision systems and smart manipulation software) are tackling a growing number of tasks.

This is not some futuristic pipe dream. Across the manufacturing and retail landscape, it’s possible to find robots designed for tasks as varied as yard operations, goods-to-person order fulfillment, autonomous forklifts, mobile automated storage and retrieval systems (AS/RS) and last-mile delivery. However, each of these systems are still just one piece of an overall goods-moving process. Many of these robots work within a limited bubble to perform single tasks.

As individual tasks are tackled by these specialized robots, there’s a growing need for an emerging practice called robot operations (RobOps). Similar to how DevOps was able to draw from best practices that made it possible for the cloud to scale to its current scope, RobOps enables efficient, seamless integration of robots from different vendors with the core workflows and processes that make up the supply chain.

Thinking ahead about the relationship between robots and human workers, we see a changing role for human labor -- from muscular power to autonomous robots supervised and augmented by human operators. An emerging role is that of the roboteer, an operator responsible for several robots to make sure that the end-to-end process is operating efficiently and without interruptions. Even better, this emerging role can often be done remotely, enabling work from home or from a central location rather than physical work on the floor of a warehouse or retail store. Connections to robots via powerful cloud-based software and faster networks will make this possible.

The whole supply chain will benefit as multiple robot systems are deployed throughout the entire process, from factories creating goods more efficiently, to self-driving trucks delivering goods, to warehouses and distribution centers filling orders for e-commerce and store replenishment functions, to middle- and last-mile delivery of products. Throughout this new supply chain, orchestration of different robotic systems and software will make sure these robots are continually working efficiently alongside their human co-workers.

The supply chain is being mended by these solutions, one link at a time. In a world undergoing massive transitions, severe health scenarios, climate-related challenges and volatile markets, the golden era of smart automation is just beginning.

The SWIFTI CRB 1300 is said to be up to five times more precise than any cobot in its class, making it ideal for tasks requiring consistent accuracy and repeatability.
ABB
December 14, 2022

QuickBot depalletizer – or QB, as it has been nicknamed – automates warehouse receiving operations with robots through easy installation and can be picking cases within a few hours.
Mujin
October 28, 2022

Now is the time for retailers to invest in predictive AI that allows them to reap major benefits across the omnichannel supply chain, quickly and correctly executing the movement of goods.
Symphony RetailAI CPG
October 1, 2022