Shipping Pallets to be Smarter, Safer and Stronger

Shipping pallets have the power to disrupt an entire supply chain. Lightning Technologies believes that it can prevent that. 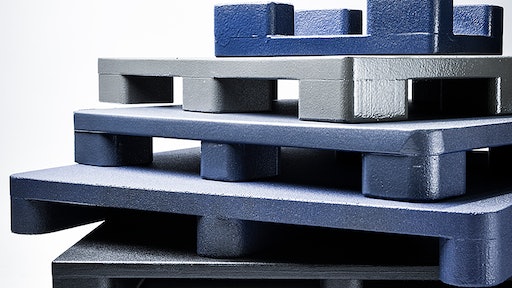 In 2009, Johnson & Johnson received complaints regarding a musty odor coming from Tylenol Arthritis Pain caplets. After retracing its entire supply chain, the company found that its shipping pallets were the cause of the smell.

The pill packages had been contaminated with trace amounts of fungicide used to treat the platforms, which carried them from factory, to warehouse, to retailer. Johnson & Johnson yanked the products off the shelves, losing $900 million.

Forbes reports that wooden shipping pallets have a habit of causing trouble within the supply chain. The wood can hold bacteria, can crack and has no potential of survival if there were to ever be a fire.

One man thinks he can solve all pallet troubles, though. Jeffrey Owen believes his Lightning Technologies is capable of creating indestructible, lightweight, hygienic and fire-retardant pallets that contain an embedded tracking chip. The Lightning pallet is made of wood, however, but it has a polymer coating that makes it durable and easy to sanitize, Forbes reports. The embedded chip records the pallet's journey in real time and tracks the temperature, humidity, accident and whereabouts.

Owen first got into the pallet business in 2003 by running his own plastics business, where he eventually started manufacturing plastic pallets. He sold his firm, Palm Plastics, in 2009.

For the last century, shipping pallets haven't seen much change. Plastic pallets were expected to transform the industry in 1965, but at $70 they costthree times as much as wooden ones. Plastic pallets also can't be repaired if they break. According to Forbes, there's 2 billion pallets that circulate the U.S.

Pallets with tracking technology isn't necessarily a new idea. However, Lightning is rolling a bunch of innovations into one in order to be more appealing. Lightning is advertising itself as a lightweight, sustainable, hygienic, easily repaired and skid-free with the capability of using active ID chips that can share information to and from the cloud at anytime.

According to Forbes, Lightning Technologies has $87 million in pallet orders before achieving mass production. The main challenge that Owen is facing is being able to produce the product fast enough. So far he has raised $20 million and expects to ramp up production this summer.