Before it starts building airships, Amazon is fighting just to get U.S. drone delivery off the ground. 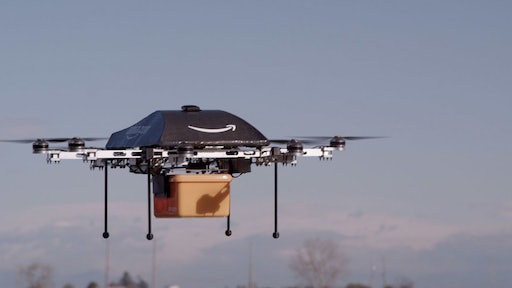 A Republican-controlled U.S. House of Representatives panel approved legislation to privatize the U.S. air traffic control system as part of a six-year bill to authorize funding for the Federal Aviation Administration (FAA).

Amazon’s proposal for a roaming airborne warehouse might sound impossibly futuristic, but it’s not the reason its Prime Air project is still grounded in the U.S.

News of the company’s patent for an “airborne fulfillment center utilizing unmanned aerial vehicles for item delivery” circulated widely after it was unearthed by Zoe Leavitt, a tech analyst at the firm CB Insights. Excitement about the proposal ignores the boring reality: The biggest problem for the e-commerce giant to solve before it can start commercial drone delivery in the U.S. is government regulations, not technology.

The patent, which Amazon applied for in 2014 and was awarded in April, describes an airship that would hover over metropolitan areas above commercial airspace at 45,000 feet. It would house a fleet of drones, as well as a select inventory of products routinely restocked by smaller shuttle ships. If a customer ordered something stored on a nearby airship, a drone would be instructed to “engage the item,” navigate to the delivery location and arrive “within minutes.”

Amazon’s Latest Patent is for an Underwater Storage Facility

Seattle Startup Challenges Amazon as the Airbnb of Warehousing