The House Is Free—If You Can Manage Moving Day 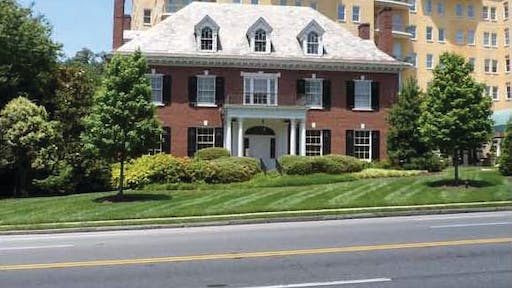 In Atlanta, a historic home constructed for Thomas Jefferson’s great-great-grandson is on the market. The cost? Free—for anyone up to the challenge of unorthodox moving-day logistics.

That fact alone—in addition to the unknowns of what it takes to renovate it—spells out why the home has yet to be sold. For that, relocation may be a more viable choice but first, potential owners need to examine the logistics involved in transporting the building for relocation.

Costs of moving a historic house

The new owner of the Randolph-Lucas House would need to pay to relocate the building to allow the neighboring 2500 Peachtree Condominium Association to expand its development. Likewise, the new owner would also have to factor in home restoration expenses, such as repairing the old roof and chimneys.

According to Hercules House Movers Inc.—which moved the Randolph-Lucas House 40 feet in 1998—relocating the building would cost an estimated $350,000.

In addition, Revival Construction recently scoped out the house for the Historic American Building Survey (HABS) in the case of the house’s potential demolition. Wright Marshall, Owner and President of Revival Construction, estimated a cost of $750,000 to $900,000 for restoration and repairs to the five-bedroom, four-and-a-half bathroom dwelling.

The cost of moving and repairs does not tell the whole story—namely, it does not consider the value of preserving a historic home. Architect P. Thornton Marye, who later contributed to the design of Atlanta’s Fox Theatre, designed the Randolph-Lucas House in the Georgian revival style.

Emily Levings, a preservationist and intern architect, recommends researching historic buildings for official recognition. If a building is listed on the National Register of Historic Places, or a similar register from an individual state, there may be tax incentives available to an individual or organization that would restore the structure.

The Randolph-Lucas House is part of Peachtree Heights Park Historic District, a neighborhood listed on the National Register of Historic Places. However, as Mitchell notes, the building would lose its NRHP designation if it were relocated outside of the historic neighborhood.

As such, moving a historic home can sometimes unearth rigmarole but other considerations are simply a matter of expert preparation. One example is in the case of how daub (grout) between the logs was drilled for airflow to prevent stress from fracturing the logs during the move, according to Nancy McDonough, Executive Director of Davies Manor Plantation.

In 2006, Davies Manor Plantation moved two historic log cabins from Memphis to its estate in Bartlett, Tennessee. After the first cabin was loaded onto the truck, museum officials encountered an unexpected visit from the local health department—delaying the move for a week so that officials could check for asbestos. Before Gotten Cabin was loaded onto a truck for transport to Davies Manor, its tin roof and porches were detached, which required two workers to stand on the top floor with poles to nudge traffic signals out of the way. While this method proved effective in this case, for the Randolph-Lucas House, a different, more viable scenario is necessary.

Different building compositions require different logistical considerations. The Randolph-Lucas House, a wood building with a brick exterior, would not need holes drilled in its grout, according to John R. Landers Jr., Vice President of Hercules House Movers Inc. Despite its solid construction, the Randolph-Lucas House’s size, particularly its height, must be considered for this residential delivery.

“The minimum height of our traffic signals is 17 feet—measured from the bottom of the traffic signal head to the top of the roadway surface,” explained Valerie Bell-Smith, Senior Public Relations Manager for the City of Atlanta Department of Public Works.

The Randolph-Lucas House stands two stories tall in addition to a finished attic—with chimneys that could reach 55 to 60 feet tall, Landers estimated.

“It’s possible that the second story, roof and chimneys would need to be removed for transport but if the house will be relocated within a few miles, this step should not be necessary,” said Landers. “I would prefer to move it all in one big piece to preserve all the historical values of the building materials.”

He further explained that Georgia Power would temporarily clip high-tension wires and divert power in the area because the moving house is not grounded. This would enable safer transport of the building with minimal disruption to the neighborhood.

Supply chain management (SCM) teaches that suitable routing is key to delivery. McDonough recalled driving across the Memphis metropolitan area to find the ideal path for the cabins’ journey to the museum. She piloted many possible paths while Don Toothman, who managed the Davies Manor house-moving project through Toothman Structure Movers, took notes from the passenger seat.

While constructed railroad tracks aided the Randolph-Lucas House’s move in 1998 to its destination, such an option no longer exists as its future move entails road routes. In fact, house-moving equipment must be customized to the project.

A custom rig—which moves like a tricycle in the event that a house is moved—must be designed from hydraulic dollies and steel supports. Additionally, a four-corner support, such as those used by cars, requires a suspension system that would warp the frame of a house.

As such, a residential delivery proves very visible during transit, as was the case with the cabin moves to Davies Manor Plantation. Police escorted the buildings during the three-hour transfer from the center of the city to the suburb, according to McDonough, who watched the scenario unfold from the side of the road.

For a visual of such a historic residential transport, watch this time-lapse video of a Victorian mansion in motion on the campus of Brown University: http://youtu.be/InCaHzbuT7Q.

By investing in efficient returns processes, retailers can tackle today’s fulfillment frustrations while also setting themselves, and the planet, up for future success.
Optoro
December 24, 2021
Follow Us