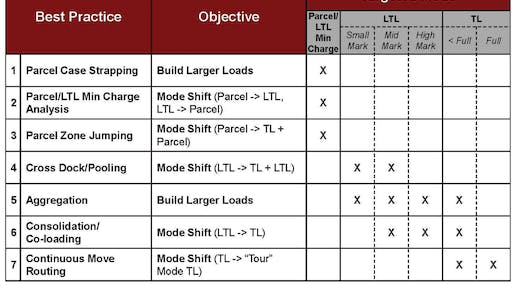 The costs and efficiencies of multimodal—moving products by combining air, rail, road and ocean transportation—are recognized by many carriers and third-party logistics (3PLs) providers, as discussed last month in the first part of this series: “Multi-Modal Management: It’s a Group Effort.” But several food & beverage (F&B) transportation companies reveal that less than 40 percent of companies make sincere efforts to institute any modal optimization initiatives, according to 2009 data from AMR Research. To improve asset utilization, lower cost-to-serve and reduce carbon footprint, companies and 3PLs need to adopt best practices. Additionally, 3PLs must be involved in multi-party collaboration to extend best-in-class modal optimization practices across a broader supply chain network.

In continuation of our two-part series, this month we identify seven best practices within the multi-modal approach of moving products; and the implications of the operating model for shippers, carriers and 3PLs.

Parcel Case Strapping—Multiple parcel orders for the same customers are strapped and shipped to the customer as a single shipment. This parcel aggregation model often reduces cost because there is an optimal weight/cube bracket within which a parcel is most economical. Shipments that are too light or small and fall outside this bracket are more expensive if shipped independently.

Parcel/LTL Minimum Charge Analysis—Parcel costs and less than truckload (LTL) minimum charges are compared for each shipment and shipped using the cheaper mode.

Cross Dock/Pooling—LTL shipments going to the same three- or five-digit zip codes can be pooled at the origin to build TL loads, shipped to the destination zip codes, cross-docked there and finally delivered to end customers via LTL shipments. This helps to transport the goods for the majority of the distance via TL, which is more economical than LTL.

Consolidation/Co-Loading—This is similar to the aggregation best practice with the difference of consolidating LTL and partial TL shipments into full TL shipments.

Continuous Move Routing—This best practice helps convert partial TL loads to full TL loads and minimizes the deadhead miles. Instead of going from point A to point B and back to point A, continuous move routing builds routes such as A to B to C and ultimately back to A. The interim stops can be either for making customer deliveries or picking up loads from suppliers to be carried back to point A.

Once the advantages of multi-modal operation are recognized, the industry will see a “snowballing” effect, i.e., after the first few successful collaborative alliances are established, a landslide of alliances will form. The following looks at the implications on shippers, carriers and 3PLs.

Shippers—Shippers have much to gain. Their most tangible benefit will be lower cost of transportation as a result of both collaboration and modal optimization. Collaboration will lower lane rates and help reduce transportation overhead costs of individual organizations, as the level of collaboration increases and the transportation function is increasingly centrally-managed across all participating shipper organizations. Another less tangible but important advantage is the ability of corporations to focus on their primary businesses. Having off-loaded the transportation function to the internal group created by the collaborating parties, or to the external 3PL hired by the parties, companies can focus on their core competencies such as manufacturing, new product design or marketing. In addition, shipper organizations can better meet their sustainability mandates by playing an active role in reducing deadhead miles and increasing asset utilization—which will reduce the total miles traveled. Sustainability benefits will not be limited to a lower carbon footprint but will also extend to other realms, such as less congestion, noise pollution and needed infrastructure. Shipper organizations can achieve all of this and maintain their competitive differentiation as value sharing in collaborative alliances is based on the individual contributions of each organization—contributions based on metrics such as scale and network footprint.