Spot container freight rates on major routes from Asia soared by up to 42 percent following the Hanjin collapse. 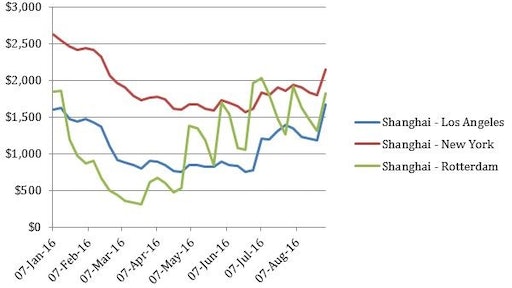 Spot container freight rates on the major routes from Asia soared by up to 42 percent following the collapse of Hanjin Shipping, data from the World Container Index (WCI) reveals.

“Unpredictable freight rates are not new phenomenon in the container industry, however, a major upheaval of supply like this is likely to cause extreme short-term price volatility. Shippers should expect increasing freight costs and tight allocation for several weeks at least,” said Richard Heath, general manager of WCI.

“The Hanjin bankruptcy means a shock to the market—some of our shipper customers are making contingency plans and asked us to assess the impact of this on their supply chains,” said Philip Damas, director at Drewry, which jointly owns WCI alongside Cleartrade Exchange.

The WCI assessed by Drewry tracks and documents the weekly changes in spot rates on 11 East-West routes.

The WCI is a weekly container pricing index based on actual agreed freight assessments reported by industry players in Asia, Europe and the U.S., and is not financed or backed by either shipper or carrier interests.