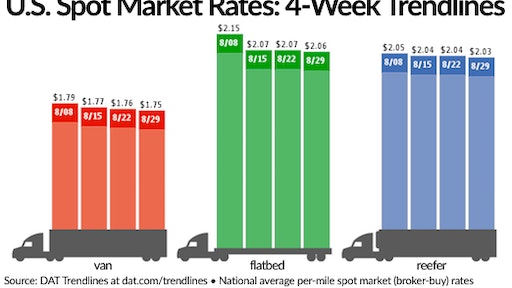 In each case, the line-haul rate was unchanged compared to the previous week. The 1-cent drop was due to a lower average fuel surcharge as the national average price of diesel fell 5 cents to $2.51 per gallon. All reported spot rates include fuel surcharges.

Van load availability recovered 3 percent, while the number of available vans jumped 2 percent. After rounding, the van load-to-truck ratio was 1.8 loads per truck, meaning there were 1.8 available van loads for every truck posted on the DAT network. The average van rate was $1.75 per mile.

Refrigerated load volume rose another 2 percent as truck capacity edged down 0.7 percent to boost the load-to-truck ratio from 4.7 to 4.9. The national average reefer rate dipped 1 cent to $2.03 per mile.

Flatbed load availability fell 4 percent, while available capacity increased 5.5 percent. The flatbed load-to-truck ratio slipped 9 percent to 9.5 and the average flatbed rate was down a penny to $2.06 per mile.

Rates are derived from DAT RateView, which provides real-time reports on prevailing spot market and contract rates, as well as historical rate and capacity trends. Load-to-truck ratios represent the number of loads posted for every truck available on DAT load boards. The load-to-truck ratio is a sensitive, real-time indicator of the balance between spot market demand and capacity. Changes in the ratio often signal impending changes in rates.