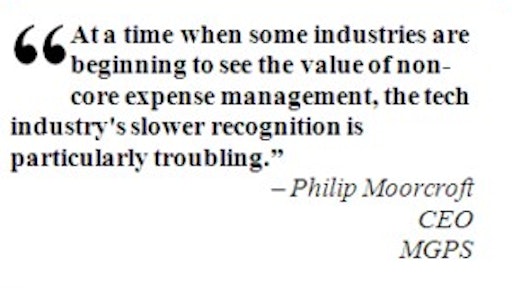 Toronto — May 20, 2009 — Just 31 percent of senior executives in the technology industry in North America view non-core expense management as important, significantly trailing other leaders in the services and manufacturing industries, according to a three-year study conducted by MGPS, a management consulting firm specializing in expense management.

MGPS said the study, which stemmed from interviews with nearly 150 senior executives in a range of industries from 2005 to 2008, underscores the gap among leaders in various industries and the attention they place on non-core expense management. The median company polled had annual revenues of $464 million and more than 1,400 employees.

Non-core expenses are indirect costs — such as packaging, transportation and real estate — that are not tied to revenue but can have a marked impact on a company's cash flow.

In contrast to the low numbers posted by technology executives, 57 percent of senior executives in the services industries consider non-core expense management to be important, followed by those working in the resources industry (51 percent) and manufacturing industries (45 percent).

"This study clearly tells us that senior leaders in technology fail to see the overall importance of improving cash flow," said Philip Moorcroft, CEO of MGPS and a former senior financial analyst for PricewaterhouseCoopers. "At a time when some industries are beginning to see the value of non-core expense management, the tech industry's slower recognition is particularly troubling."

In interviews with executives, Moorcroft discovered that most cost-cutting measures tended to be confined to non-core areas, such as limiting travel, or undertaking cuts such as switching to cheaper coffee brands or reducing free snacks.

To underscore the potential cash savings that can result from analyzing non-core expenses, Moorcroft described how a $1.1 billion oil and gas company sought help in cutting costs and increasing cash flow. The company had 1,000 employees and a $4.2 billion market cap. After reviewing non-core expenses, the company was able to save 27 percent in non-core costs alone, totaling nearly $1 million.

"Those companies that realize that non-core savings leads to greater cash flow are ultimately in a better financial position for the long term," he said. Unfortunately, Moorcroft noted, many executives he meets expect the economy will eventually improve and that they will not need to pay attention to non-core expenses.

"There is a growing sense that the economy is improving and that government assistance will enable organizations to ride out the storm without having to focus attention on small-ticket items," said Moorcroft. "That is a very dangerous stance to take in any economic climate."

The study is available (registration currently not required) at the MGPS homepage.